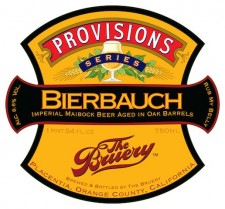 From The Bruery – Meaning Beer Belly in German, Bierbauch is the Provisions Series ale for the month of May 2011, so of course we had to make a Maibock! And we’re The Bruery, so of course we had to make it imperial! And why stop there when you can age it in oak barrels for a few months? The last strong beer you’ll need before the heatwave of summer is upon us, this verson of the traditional German lager is rich and oaky.

Appearance: Pours a semi cloudy bright yellow gold with a thin off white cap of foam.

Taste: Big biscuity malt, grassy hops. My imagination came up with “Imperial Green Bottled Lager.” as a way to describe this. The oak pops out as the beer warms up.

Overall: This didn’t do it for me, but was a fun concept, and willing to try it again if it’s made again.