Product description: When we say we don’t brew to style, we mean it: Our Oktoberfest beer is a dry-hopped rye lager with an earthy, biscuity flavor profile. Prost! Kind of! 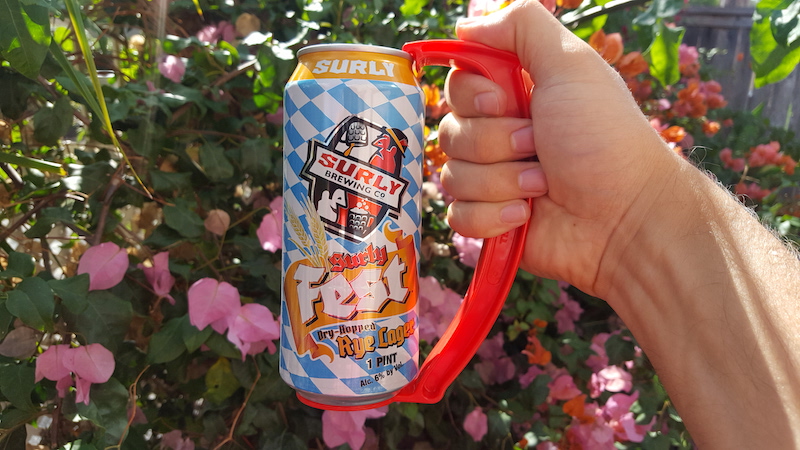 Since it is now Oktoberfest season (remember Oktoberfest is celebrated in September), I’ve been sampling Oktoberfest interpretations from a variety of American craft brewers. Surly’s rendition here is, how should I say it, non-traditional.

I sampled one of the 16oz Bavarian checkered cans from glassware and the second directly from the can in the beer stein format. SurlyFest is crystal clear, dark reddish amber in color with excellent yellow foam and tremendous head retention thanks to the overdone hop content. The aroma is hoppy for this style with fresh lemon volatiles at the beginning followed by chocolate orange and dried orange peel. Once it warms, there are richer notes of maple and rum-soaked fruit cake.

The flavor starts dense and grainy with whole wheat crackers, rye toast, and oatmeal coupled with fresh citrus, dark orange, and even cocoa powder. The mid-palate does have some biting piney hop resin and the finish lingers with more hop bitterness and rustic grain. Drinking it straight from the can does negate the excellent dry-hop character, so I didn’t see the appeal of that.

With the first can I sampled, I really focused on the rye grain aspect of this beer. It creates body density and adds a rustic character. But once I tried this back to back with a couple of other American Oktoberfest interpretations, SurlyFest is so much more bitter that it’s closer to Red IPA comparatively. It’s not refreshing and it can’t be slammed like regular Oktoberfest, the best examples of which are pale colored and fairly nuanced. It’s just so chewy and dense from the heavy grain plus heavy hop character. It’s a full meal in a can here. One could call this a Märzen hopped like an IPA.

Overall, it was fun to revisit this seasonal from Surly, which is a non-traditional, American take on the Oktoberfest/Märzen lager style. It’s dense and powerful – punching like a Red IPA. That sort of betrays the principle, though, as festbier should be a sessionable, slammable festival beer. Still, it’s all semantics and the final result is a beer that is technically flawless albeit unusual.