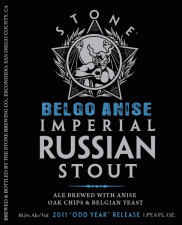 From Stone – This 2011 Odd Year release pours pitch black with a deep tan head, with aromatic notes of anise, coffee, and cocoa jumping from the glass. Coffee and dark roasted malt flavors dominate, with a robust compliment of anise and oak, which leave a lingering blend of vanilla, licorice, and dark malt on the palate. This one will age nicely for several years

Appearance: Pours a jet black with an impressive dense head of foam that subsides to a mere film. No lace left behind, no light getting through this guy.

Aroma: Black licorice/Jägermeister. There, I said it, Jägermeister. I’m betting most young folks are more familiar with the potent spirit than they are with black licorice, this beer smells like Jager,Jager smells of anise. Once I move past that, we move into slight wet dog, dark chocolate and herbal hops.

Mouthfeel: Perceived to be thicker than OG IRS, almost silky and certainly thicker.

Overall: I loved this beer. I went in with a chip on my shoulder, as I am not a fan of certain Stone beers with Belgian yeast, and wasn’t a fan of Old Guardian Belgo Barleywine. I really enjoyed the dominating anise, I enjoyed what was underneath that, I enjoyed the big mouthfeel. There is nothing stopping me from laying down a few of these, except for the fact they are tasty, and will be calling my name to come crack them open.