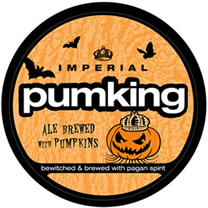 From Southern Tier – Pumking is an ode to Púca, a creature of Celtic folklore, who is both feared and respected by those who believe in it. Púca is said to waylay travelers throughout the night, tossing them on its back, and providing them the ride of their lives, from which they return forever changed! Brewed in the spirit of All Hallows Eve, a time of year when spirits can make contact with the physical world and when magic is most potent. Pour Pumking into a goblet and allow it’s alluring spirit to overflow. As spicy aromas present themselves, let its deep copper color entrance you as your journey into this mystical brew has just begun. As the first drops touch your tongue a magical spell will bewitch your taste buds making it difficult to escape. This beer is brewed with pagan spirit yet should be enjoyed responsibly.

Taste: Cinnamon, clove and nutmeg, predominantly, plus notes of gingerbread, but with less sweetness than I would have expected. A slightly IPA-ish, resiny finish rounds it out nicely. I haven’t been able to pin down which hops were used in this beer, but some of the flavors remind me of East Kent Goldings, although they could have come from the spices added.

Mouthfeel: Clean with a pleasant amount of fizz. Not as thick as I’ve come to expect from anything labeled “Imperial.”

Overall: Strap a rocket to its ass and shoot this straight to the top of my list of pumpkin beers. To me, pumpkin beer should taste like pumpkin pie; this is the closest any has come while still maintaining the flavors of Pacific Northwest hops.