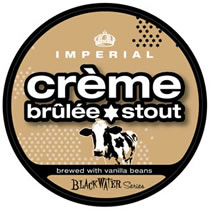 From  Southern Tier Brewing – By comprehending the labyrinthine movement of time, one would not think it strange to trace the errant path of an ordinary object such as a cream dessert only to discover that it has been the cause of cultural disputes since the middle ages. The British founders of burnt cream and from Spain, crema catalana, both stand by their creative originality and we respect that, but it was the French Crème Brûlée, amid the strife of contention, that survived to represent our deliciously creamy brew.

Overall: If you picked up this beer hoping for something that tastes like creme brulee, you wouldn’t be dissapointed.  This beer is just too sweet for me to want to drink more than a half a glass.