From Sierra Nevada Brewing – Hop Hunter IPA harnesses the complex flavors of just-picked hops through an all-new method of steam distilling wet hops before they even leave the fields. This revolutionary technique captures and intensifies the natural flavors, creating a unique and intensely aromatic beer. Our custom process gathers pure hop oil which, when combined with traditional whole-cone hops in the brew kettle and in our Hop Torpedo, makes for an incredible IPA experience. 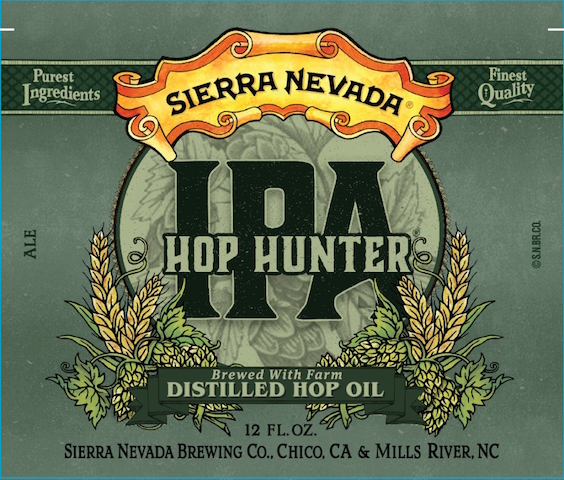 Aroma: From crack of the bottle to glass, its mighty fragrant. Upon further inspection, you get a juicy fruity nose of orange and tangerine. All aspects, zest, pith and meat. Also a bit of pine and herb after my nose gets used to that crazy burst of fruit.

Mouthfeel:  Very thin for a Sierra Nevada IPA, I perceived it to be thinner than Ruthless Rye and Sierra Nevada Pale Ale. Average carbonation.

Overall:  I was a bit let down with this new offering. As a big fan of Sierra Nevada, I have found that there is a signature flavor and aroma profile between all of their IPAs, whether it be Torpedo, the Harvest Ale series, Hoptimum and so on.  This tasted like all of them, but lacked body I look for in a Sierra Nevada beer.  The aroma did impress me, but after that, this was very boring. Much like purchasing a music album that doesn’t jive well on the first listen, I waited a day to give it another try, and wasn’t any more thrilled with the beer. With all that seemingly harsh criticism, it is a solid, above average beer that I’d gladly drink again, I just had higher expectations.