Product description: As brewers, we get the privilege to sample our beers straight from the tanks in all their raw glory. Some beers need a little polishing to get ready to go out into the world, while others—the hop-heavy, rowdy, crowd-pleasers—should just be left alone. We wanted to share this brewery-only treat with you, so we present this Hazy Little Thing, our unfiltered, unprocessed IPA, straight from the tanks and into the can. 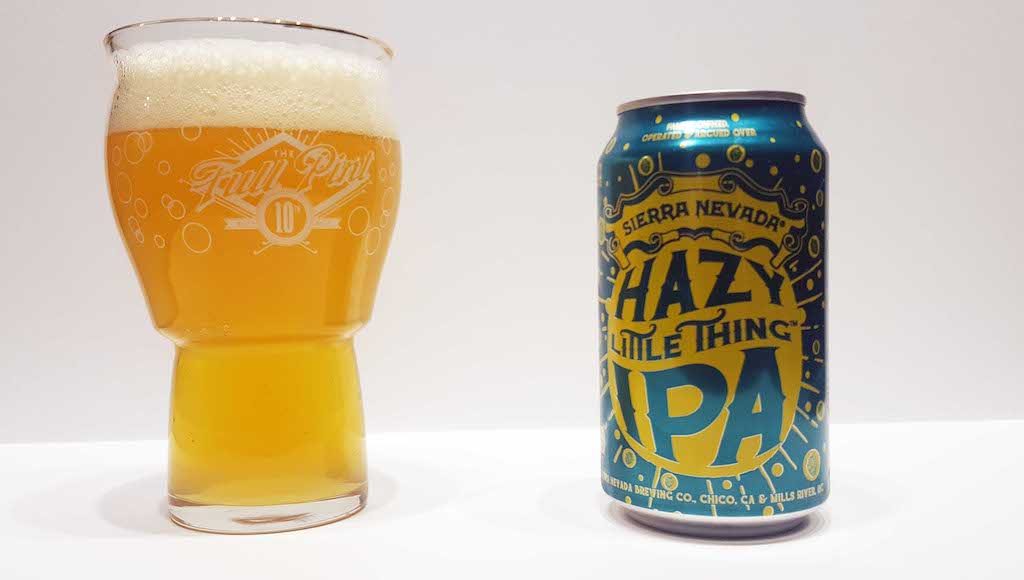 Hazy IPAs or New England Style IPAs were the biggest craft beer fad last year and their popularity continues into 2018. It’s a beer style that doesn’t lend itself well to mass distribution, so we have seen very few on store shelves. Epic has distributed one as has New Belgium . And for those in the Southern California region, we got Modern Times Critical Band as well last year . But, we are still waiting for a regional brewery to nail this style and bring it to the masses. Has Sierra Nevada finally done it? Today we will find out.

I’m sampling this from a 12 oz can packaged on 1/4/18, so it is just under a month old, which should not be an issue given Sierra Nevada’s market-topping shelf life. Into the glass, the beer is a light straw to golden color with medium white foam that has relatively poor head retention for this style. But the main problem right away is that this beer is not hazy. Sure, it is slightly hazy compared to a completely clear IPA. But that’s not the opacity we are looking for in this style. The forerunners in this segment look like a pineapple milkshake. This is perfectly see-through with mild haziness.

Right after pouring, the aroma brings subtle coconut and pineapple notes, which are very nice but volatile – dissipating in under a minute. The aroma then moves to star anise, peppermint, and spicy Belgian yeast. Really, it smells more like a dry-hopped Belgian ale right now. Sure, there are some more expected aromas of sweet guanabana and overripe tropical fruit as it warms. But you have to dig deep for that as it is hidden behind phenolic oddities. Other hazy IPAs just explode right out off the bat with this tropical fruit overload.

On to the flavor. For some reason, the only thing I can think of is Belgian IPA when I’m drinking this beer. It has a prominent white pepper kick to it while the sweetness here is middle of the road compared to the NE IPA savants, which are sweet like a banana papaya smoothie. The body is clean, a bit thin, but quite balanced with very little sugar. The mouthfeel on this is great with an oily slickness and then phenolic spices dance around with white pepper and anise. There’s a soft water profile here giving the beer a quenching character like lemon-lime Gatorade. In the finish, you get some acidity piling on that I wasn’t expecting that is quite lactic perhaps from the acidulated malt addition. Overall, the beer is lighter-bodied akin to a session IPA plus you have that Berliner Weisse style lactic acidity. It’s a far cry from the full-bodied, dense and milky NE IPAs from Monkish, Trillium, TreeHouse, and others.

It’s very good, flawless even, and endlessly enjoyable. It’s just not what I was expecting, and I don’t think it captures what consumers are after when they hear “Hazy IPA.” I took a look at the Sierra Nevada website and it does reference the haze craze, but it doesn’t directly mention that this beer is an attempt to clone an NE-Style IPA. Still, I believe beer enthusiasts out there are expecting this beer to be in a similar vein to the hazy IPAs we’ve all grown to love from our local breweries. Unfortunately, that’s not what this beer is. I drank this side by side a more authentic clone by Mikkeller San Diego, and they don’t have much in common. The Mikkeller one is murky, fruit juice forward, sweeter, and has tons of that yeast sediment character for better or worse.

The haze effect in this beer, I surmise, is just the oats addition plus no filtering or lagering. But the top contenders in this segment are super murky and have incredible amounts of yeast in suspension. I’m a broken record on this point, but that yeast re-addition is what makes or breaks the NE IPA style. It makes it look cool in the glass, but it more often than not it ruins the flavor and palate with heavy chalk flavors. I think Sierra Nevada figured that out and didn’t even go there with this beer opting for something more time-tested like oatmeal IPA.

To be clear, I love this beer. It’s some sort of Frankenstein hybrid between a Belgian IPA, oatmeal IPA, and tropical session IPA plus that light acidity found in Gose or Berliner Weisse. It’s got everything and is immensely refreshing. It’s just not a New England type of Hazy IPA. And that’s perfectly fine. Perhaps Sierra Nevada knows that those recipes don’t hold up well on store shelves, so has opted for a different approach. My main criticism then would be that consumers are expecting the real deal Hazy IPA, but instead are getting this experimental hybrid that Sierra Nevada has cooked up.

So in the same conclusion as my New Belgium Voodoo Ranger Juicy Haze IPA, it remains to be seen if a regional brewery will start distributing a decent NE IPA clone.