Product description: Heady Topper is not intended to be the strongest or most bitter DIPA. It is brewed to give you wave after wave of hop flavor without any astringent bitterness. We brew Heady Topper with a proprietary blend of six hops—each imparting its own unique flavor and aroma. There is just enough malt to give this beer some backbone, but not enough to take the hops away from the center stage. 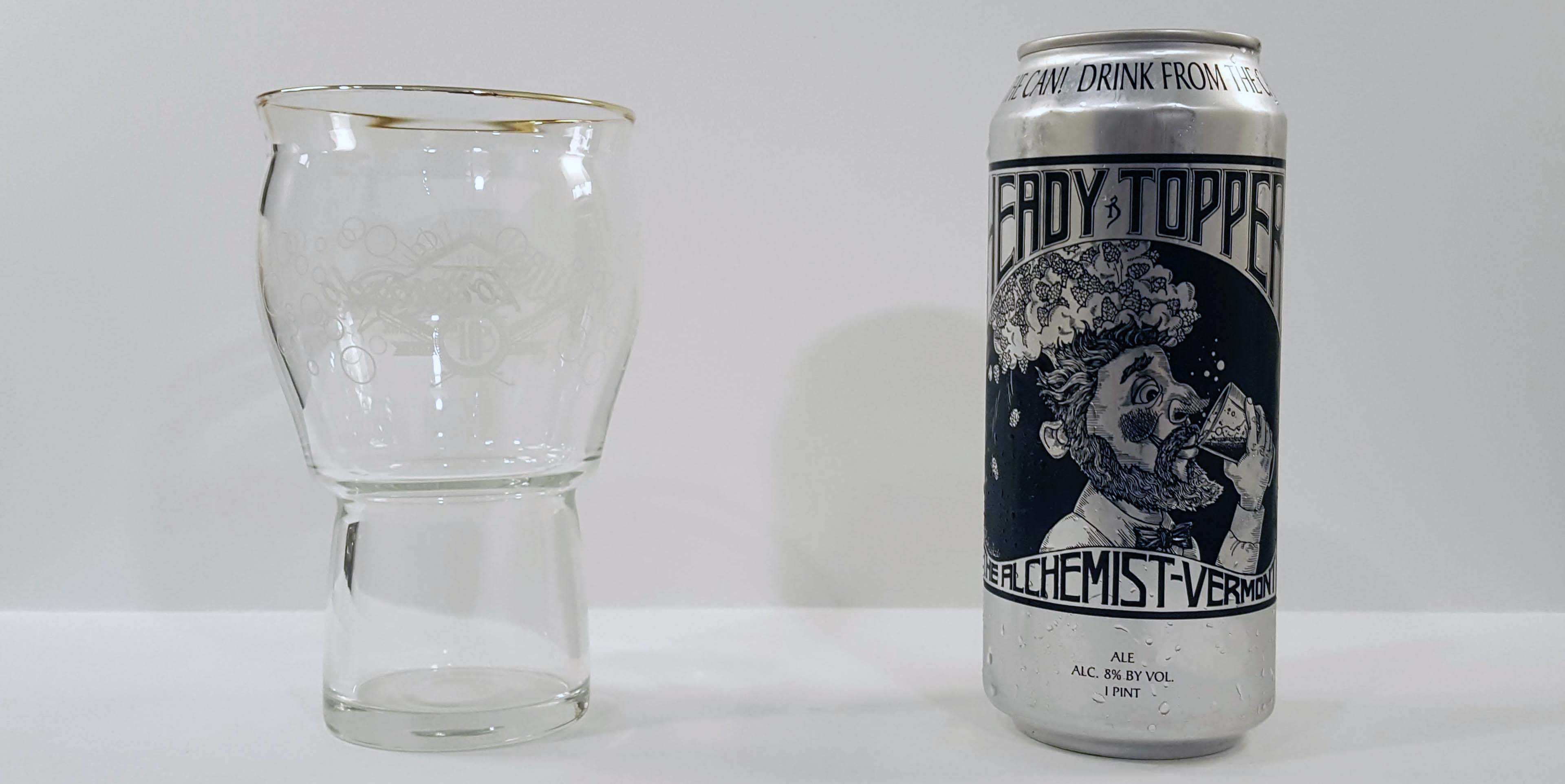 Southern California recently received an allotment of various Alchemist beers that set off a feeding frenzy. My local bottle shop was selling Heady Topper for $23 per can and still sold out. It’s no surprise as Heady Topper is one of the most coveted beers in the world. But it has been around since 2004 and for many years it wasn’t such a big deal. I remember trying this first in 2010 and noted how expressive the hop aroma was as well as the intense bitterness in the flavor. It was an excellent Double IPA all around, but what was it that set this beer apart from everything else? I never understood it. So today I wanted to revisit this beer and find out why it has such legendary status.

I’m sampling this from a 16oz can that has no canned-on date to be found. (Word on the street is that these are less than two weeks old.) You’ll probably notice above that the glass is empty. Well, this has instructions in very large font to drink it straight from the can as well as a long explanation of why to do so on the reverse label. In a nutshell, you’re meant to drink it from the can so as to contain as much of the hop aroma as possible. Pouring it into a glass would expel these volatile aromas and you would be left with a less impressive nose after a few minutes. I decided to follow the instructions for the first half of the can and then switched to a glass midway through like a heathen.

The logic holds up because even through the tiny mouth of the can, I get a powerful dry-hop aroma of ripe papaya, fresh mango, and orange creamsicle. It’s outstanding for sure. Dig in and there’s a lot of white sugar at the front of the palate allowing the papaya and mango flavors to really pop. Transitioning to the mid-palate, there’s a lot of raw grain character like steel-cut oats and some huskiness. Apparent bitterness is then lower than expected at around a 6/10 intensity-wise with residual sugar and prominent saltiness providing excellent balance and added buoyancy. I’m really struggling to see how this beer is reportedly 100+ IBUs as I don’t get anything resembling super aggressive bitterness. Overall, this is very tame and drinkable with high carbonation giving it a refreshing character. ABV is similarly well-restrained and doesn’t play a big role in the flavor, fortunately.

I did end up pouring it into a glass about halfway through. It’s a gorgeous beer – less turbid than newer hazy IPAs out there with a brilliant pale golden color and thick white foam. I don’t think the glass really kills off the aroma too much, but I’m glad I tried the first half directly from the can. What the glass does improve on is how much liquid you can get with each sip. Now there’s more liquid to dance around the palate. It’s never boozy or sticky and the tropical fruit character continues to intermix with that farmy grain character that is love it or hate it. (I tasted the same thing in the other Alchemist beers I tried recently, so it may just be the terroir of the brewery.) The finish still suffers like the majority of hazy IPAs from the chalky flavors of yeast sediment and unflocculated heavy proteins in solution. It’s a raw beer that both appears and tastes unfinished. But the aroma is outstanding and the beer is still easy to enjoy in every way.

Overall, I think the beer is very good. But I think that much of the adoration around it is due to name recognition and the effort required to obtain it. When it debuted and gained popularity, I have no doubt this was a game-changing beer that helped launch the NE-style IPA craze we have today. But now that there are so many copycats out there, especially ones made locally for many of us, it’s tough to point at Heady Topper specifically and say, “this is the best of all.” I’d certainly like to revisit this in a blind taste test head to head with other hazy IPAs at this alcohol level. For now, it still boggles my mind that something that today would be considered state-of-the-art in the world of hoppy craft beer was being made in 2004 in Waterbury, Vermont. This is a beer for the history books.