Product description: Enough with the run-of-the-mill pumpkin beers. I’m not interested in an ale that takes cues from a frozen coffee drink, and neither are you. That’s why I made Atomic Pumpkin. Does it really feature Habanero peppers? Yep! What about Saigon Cinnamon? Ding! Aji and Del Arbol peppers? Winner. I round it all out with a hearty malt bill that makes for a spicy brew that puts the “Fun” back in Pumpkin. (Spelling was never my strength). — Voodoo Ranger. [Made with Pumpkin juice, Saigon Cinnamon, Habanero, Aji and Del Arbol peppers Malts: Pale, Munich, Caramel 80. Hops: Nugget. 10 IBUs, 6.4% ABV.] 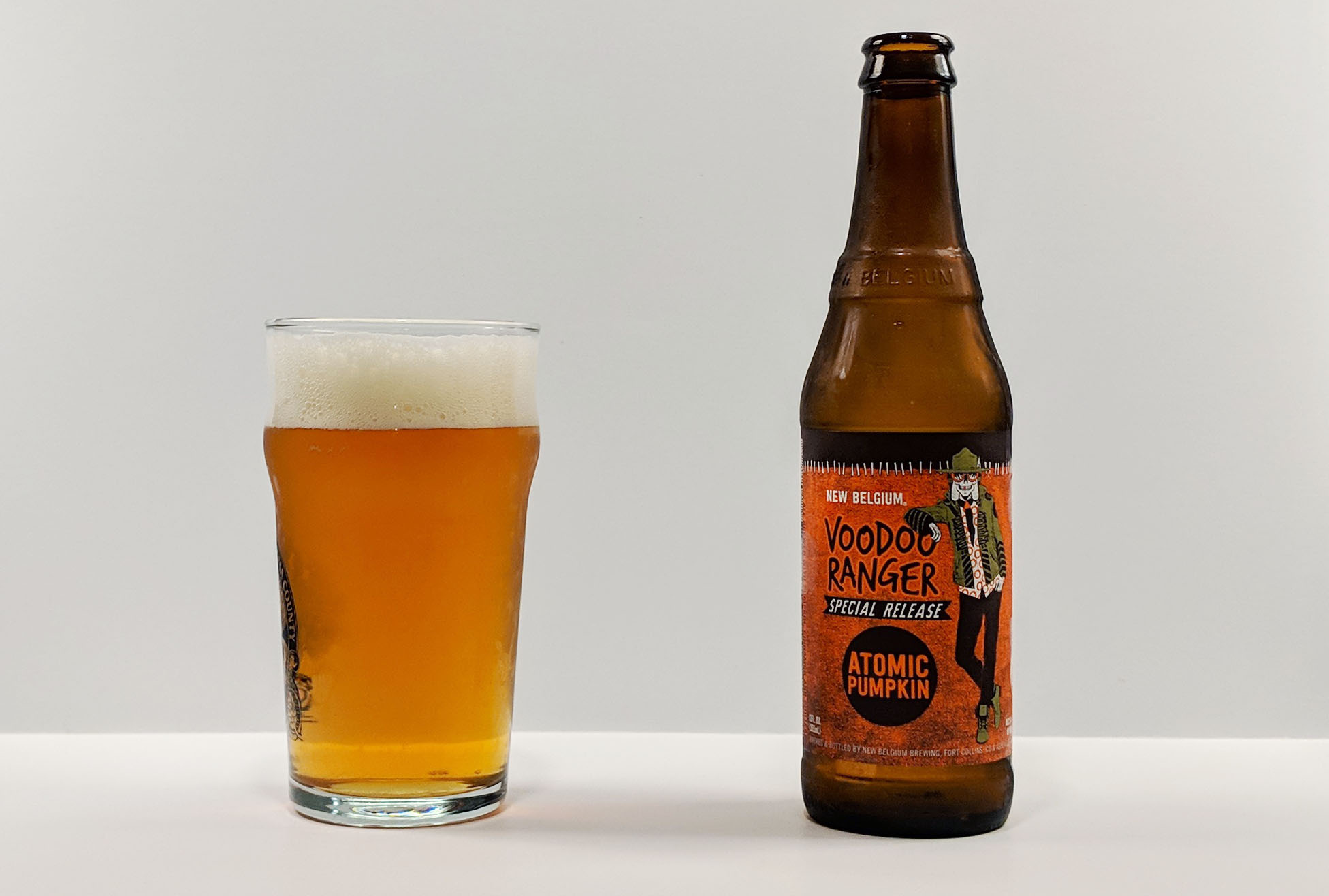 Sampled from a 12oz bottle, the first thing I notice is that New Belgium neglected to make the bottle label say “Spicy Release” like the 6-pack paper carrier. So holding this beer for the first time and not having seen the paper carrier, I did not know this was supposed to be a spicy pumpkin beer. In small vertical font on the side of the label, there’s a casual mention of “habañero” [sic] chilis. But few will be reading that until after taking their first sip.

Part of New Belgium’s bizarre Voodoo Ranger lineup that has no discernable theme; Atomic Pumpkin is crystal clear, light amber-colored in the glass with beautiful white foam that sticks around for several minutes. Immediately, powerful cinnamon dominates the aroma and doesn’t let up for any other complexities. It’s high-grade cinnamon too with a pungent, more vivid presence than other cinnamon-spiced beers. As it warms, pie crust comes through and with it the illusion of pumpkin pie.

Dig in, and you are greeted with a familiar mix of cinnamon and a richer amber ale base that brings a touch of caramel and fresh honey bread rolls. The mid-palate adds buttery pie crust and then you’re left with a flabby, dead finish with lingering chili pepper heat. Though the spice level is nicely controlled with the first couple of sips, the more you drink it, the more the capsaicin heat piles on as each receptor in your mouth is activated. In the aftertaste, this heat does not want to not go away. But peak spiciness never passes a 5 out of 10. In addition, Atomic Pumpkin is sweet and oily enough to balance it out in long run. Nothing has gone overboard here. As I noted in my review of Dogfish Head’s Punkin Ale, actual pumpkin flavor is lost on me as the spices dominate. Plus, pumpkin itself is such a nuanced flavor to begin with.

My final take on Atomic Pumpkin: it’s an interesting beer with a flavor mix that is original and fun to try. I’d say for what it has sought out to achieve, Atomic Pumpkin is quite successful. It brings you that expected fall-spiced amber ale and adds just a little twist. The habanero addition accents the cinnamon and puts it nearly over the top, but it isn’t too spicy in my opinion. After the initial shock of the chili peppers, it softens up a bit and is quite enjoyable. I think it’s worth seeking out for novelty’s sake alone.