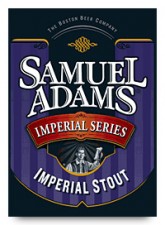 From The Makers of Samuel Adams – A MASSIVE BEER – ONCE BREWED FOR ROYALTY.
Samuel Adams Imperial Stout is our take on the traditional Russian Imperial Stouts from the 18th century. English brewers supplied these stouts for the Russian Imperial Court of Catherine the Great, who had taken a great liking to the beer. In order for the beer to survive the long trip to St. Petersburg, the flavor and alcohol needed to be amped up to preserve the beer.

Aroma: Roasted malts and dark fruits are very apparent in the intial smell.  I get aromas I would associate with an Abbey Dubbel or Belgian Strong Dark ale.

Overall: I dare any Imperial Stout fans to put this in a blind taste test with a handful of other Imperial Stouts. This beer is smooth, bold, and easy to drink at 9.2% abv.  Congrats to Boston Beer Co. for engineering such a great beer.