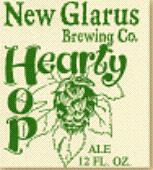 From New Glarus Brewing – Finally, Hop Hearty Ale, the Wisconsin I.P.A. you’ve been thirsten’ for. This ale is brewed with the best of Old and New World Hops. Then we infuse the aging tanks with a dry hop addition of Cascade and East Kent Goldings to bring home the hops!

Appearance: Pours an opaque amber with an offwhite, dense head.

Aroma: Resinous piny hops (my guess is the Cascade).

Mouthfeel: Full bodied, almost creamy, but not quite.