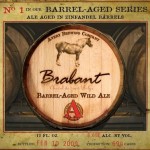 From Avery Brewing Co. – Brabant is the first installment in a new series of Avery beers known as the Barrel-Aged Series, and features a long list of experimental techniques and ingredients in its creation. Brabant is a barrel-aged wild ale, using two strains of brettanomyces yeast during fermentation followed by 8 months of maturation in Zinfandel wine barrels.

Appearance: Pours a dark brown with a frothy tan, sudsy head. The head starts out huge, and subsides to a 1/2 inch.

Aroma: Of note, you can smell this beer from the neck of the bottle, and from a few feet from the glass you pour it into. Starts of with whiffs of oak, brett. After more examination, I can pick out some dark fruits such as plums as well as red grapes. There is a little bit of dark malt in the nose as well.

Taste: A mixture of funky brett, sour and dark fruit, chocolate, a big oak presence. You think it is going to finish sour or tart, but it ends with some malty funkiness.

Overall: Highly complex, and a great original “Wild Ale.” I have had many beers that are very similar in the categories of Sour Ale, Wild Ale, and Belgian Dark Strong Ale with bugs that all have similarities. This beer has set itself apart from the pack. Bravo to Avery for their first beer in their ‘Barrel-Aged Series.’