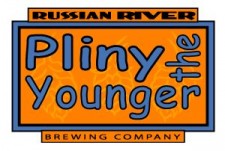 From Russian River – Pliny the Younger, the man, was Pliny the Elder’s nephew and adopted son. They lived nearly 2,000 years ago! Pliny the Elder is our Double IPA, so we felt it was fitting to name our Triple IPA after his son. It is almost a true Triple IPA with triple the amount of hops as a regular I.P.A. That said, it is extremely difficult, time and space consuming, and very expensive to make. And that is why we don’t make it more often! This beer is very full-bodied with tons of hop character in the nose and throughout. It is also deceptively well-balanced and smooth.

Appearance:  Pours a slightly hazy amber gold with a thin bubbly film atop.

Overall: A remarkable showcase of hops. Last years batch seemed smoother and perceptively maltier.  This batch seemed a little dryer and snappier.  The nose is something amazing and the intense mouthful of hops just blows you away. Well done!