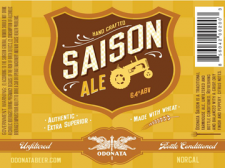 From Odonata – Our Saison is made with malted barley, lots of wheat, rolled oats, Styrian & East Kent Golding hops and a yeast strain that combines the best of wine & beer fermentation. We take no short cuts in the brewing of this beer and ultimately let the yeast do its own thing, pulling strong from the way brewers have worked for centuries.

Appearance: Pours a cloudy bright amber gold with a fluffy head that quickly subsides to a thin cap.

Aroma: Big fruity spicy yeast right off the bat. You can smell it from a few feet away. Also a bit of banana and clove.

Overall: A nice Saison. I think this is better on the cold side than say cellar temp. This beer holds up to many classics.