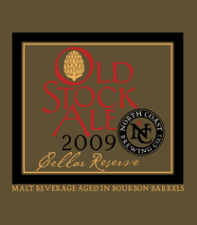 From North Coast Brewing – Old Stock Cellar Reserve is a small batch, limited release that has been aged in oak bourbon barrels. The aging process gives this world-class an added layer of complexity. A memorable drink that should be enjoyed as a completely unique offering.

Appearance: Pours a dark mahogany with a dancing seltzer like head that quickly dissapears to nothing. You can see little bubbles rising to the top well after the pour, this thing looks pretty carbonated. It gave a nice pop when I opened it. The bear doesn’t anything on the sides of the glass either.

Mouthfeel: Medium bodied with some alcohol sting and lively carbonation.

Overall: An amazing beer. I love Old Stock as it is, but this is the equivalent of bacon wrapped filet. If this was a regular release, I would never drop this much on a beer, but because it’s something I won’t get to try for another year or two, I can deal with it.