Product description: Crafted with Oregon-grown hops, this Oktoberfest marries Northwest ingredients with a traditional German style. Celebrating the harvest, this light-bodied beer has a toasty malt bouquet and just a touch of hop bitterness. Prost! 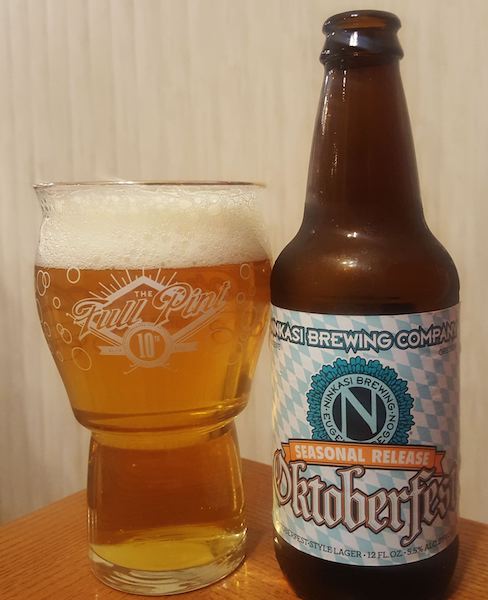 Sampled from a fresh 12oz bottle, Ninkasi Oktoberfest is clear gold in color with large-bubbled, weaker foam with decent retention. Well here is an Oktoberfest that really looks the part!

The nose is on point with rich maltiness, candy corn, white sugar, wholegrain bread, and flashes of volatile lemon oils. Initially, the taste is a bit soapy and metallic, but the mid-palate brings subtle malt sweetness from the Carahell and Munich additions. In the finish, the beer is still a touch too soapy for me. As it warms and I get better acquainted with the beer, the soapiness is replaced by a grassy hop bite that I didn’t appreciate before. It’s sharp but not out of place for this style. Ninkasi’s spin for their Oktoberfest is that it includes a variety of Oregon-grown hops (Sterling, Crystal, Willamette, Mt. Hood), which are mostly lower alpha acid varieties and some with noble hop characteristics. So, the lemon and grass flavors make sense. The label says a “touch of hop bitterness,” but it ends up more prominent than that.

I ended up enjoying this much more than I expected. I’ve been sampling Oktoberfests from a variety of American brewers and Ninkasi’s is so far the most authentic if you can believe it. It has more in common with what one may consider a pilsner than Oktoberfest, but real Oktoberfest/Festbier isn’t necessarily supposed to be your heavy caramel malt amber lager. This is bright and crisp with ample grassy hop character for balance. It’s a true festival beer and worth grabbing a six-pack.