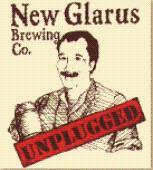 From New Glarus – Apple Ale sings with the fresh crisp taste of Wisconsin Apples. Our Brewmaster, Daniel Carey, begins with a brown ale base employing Wisconsin farmed barley and a blend of apple varieties grown in Gays Mills. Our apple growing friends squeeze them especially for this brew.

Appearance: Pours a vibrant amber gold with a small head of tight bubbles that quickly fades to nothing. The body rather clear, and leaves behind no lacing.

Taste: Lots of apple, juicy sweet apple and tangy apple and a little bit of spice. No bitterness to be found. Really just tastes like cider to me.

Overall: I’m sure there is barley and hops in this, I just can’t find it. It’s very tasty for what it is. Better than many hard ciders I’ve tried.