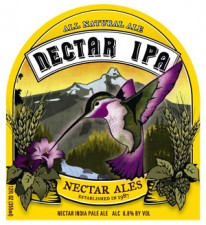 From Nectar Ales – Our IPA is created from a base of Pale and Crystal malts and is aggressively hopped throughout the brewing process with a final hop addition in the conditioning vessel. A beautiful flowery hop aroma will greet you as you dive into this hop lover’s dream. A middle caramel malt presence balances high hop bitterness with hop flavor end to end… learn to love hops!

Appearance: Poors clear  copper/orange/amber with a foamy 1/4 offwhite head. Leaves tons of webby lacing on the glass as I drink it down.

Overall: I never got to try this beer when it was made by Humboldt Brewing.  With that in mind, there are many trademarks/similaries in this beer, and the rest of the “Pale” series of Firestone Walker label beers.  I’m going to go out on a limb and say, while Union Jack IPA is an overall better beer, this beer is great, and is more appropriate for a large gathering than UJ is. Even though the ABV’s on both aren’t that far apart (6.8% vs 7.5%), Nectar IPA is more refreshing and easier to “session” with.