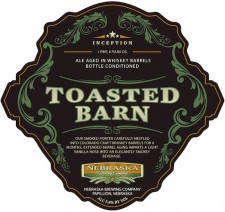 From Nebraska Brewing – The first beer in this series, Toasted Barn, is a Smoked Porter aged in Stranahan’s Whiskey barrels. When originally brewed, Toasted Barn had a robust smoky character through the addition of 35% Smoked Briess Malt. It seemed a fitting combination at the time to send this beer through extended aging within the Whiskey barrel program used for other beers such as Black Betty RIS, and Fathead Barleywine. The resultant beer is one with a mellowed smokiness, vanilla aromatics, and oak tannins which elevate the finish into a very remarkable beer.

Appearance: Pours a dark brown with a layer of tan froth.

Overall:  Toasted barn indeed. I didn’t pick up any whiskey notes, or at least I didn’t perceive any. I will revisit this beer if given the opportunity.