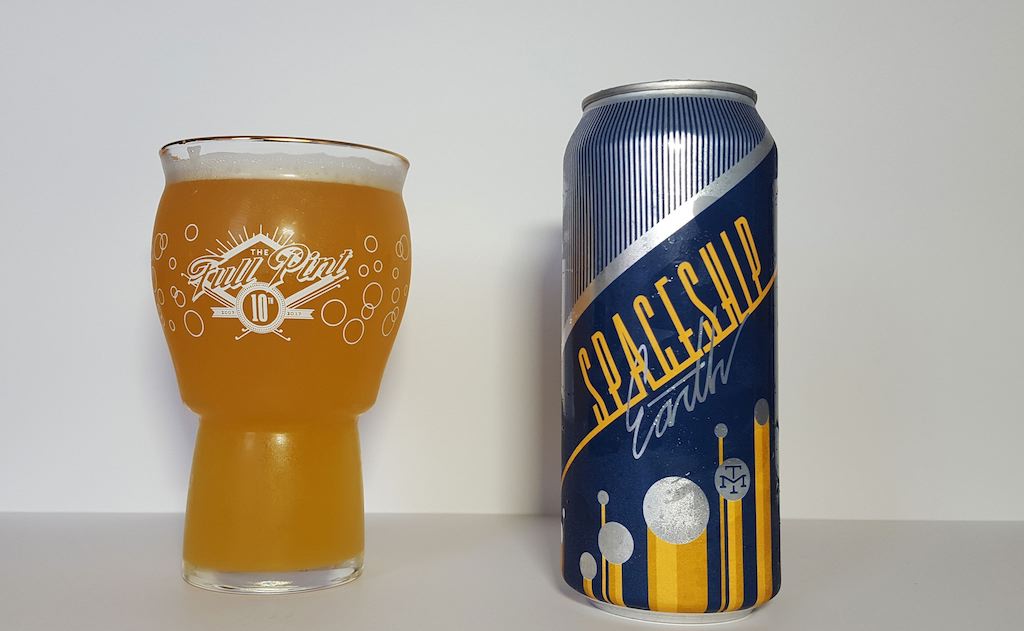 Trying these from a 4-pack of 16oz cans ($12) packaged three days ago, Spaceship Earth is Modern Times’ official October special release for retail distribution. I love the original retrofuturist can design and the name, which comes from a late 19th century / early 20th century term that came to mean “a concern over the use of limited resources available on Earth and encouraging everyone on it to act as a harmonious crew working toward the greater good.”

Enough history, let’s drink this thing. Popping open the can, this beer is glowing straw-colored as it goes into the glass. With roaring carbonation, it generates a thick, meringue-textured head of foam. There’s impressive head retention while each sip leaves thick gobs of lacing along the edges of the glass. It’s perfect in the aesthetics department.

For the aroma, there’s a whole lot going on with green mango, green banana, pineapple upside down cake, canned pineapple, and pomelo. It’s complex and tropical fruit-focused. From the first few sips, I already appreciate the lower ABV and dry body. It’s a departure from their hazy IPAs, which are usually sweeter in keeping with that style. Spaceship Earth stands alone squarely as a hazy pale ale that is lighter-bodied and sessionable.

Tons of pulpy white grapefruit dominate the front of the palate here with no sugar component. It moves to more grapefruit pith and herbal bitterness accentuated by the dry body. In later samples, I noted some sage and lavender at this point, which really drives home that this beer is a different animal from their hazy IPAs. It’s dry, super bright, herbal, and refreshing. It reminds me of Hill Farmstead/Grassroots APAs and also of De la Senna Taras Runa. The former are difficult to acquire and the latter, I believe, is discontinued, so I’m over the moon to experience a beer like those once again.

The finish is lengthy beginning with fresh French bread with flour dusted on the crust, fleeting richness of lemon custard, and ending with mild acidity in the backend, which is in keeping with the beer’s white grapefruit centric profile. Overall, Spaceship Earth isn’t aggressively bitter, but it leans towards the bitter end of the spectrum in the vein of an herbal hoppy, dry, Belgian pale ale.

Here, you get all the aroma hop fun from a hazy IPA, but the beer is more refreshing with small acidity and quenching character like carbonated white grapefruit juice. It’s incredible. I feel like I’m always saying this, but this is one of MT’s best to date. Spaceship Earth is nothing short of perfection.