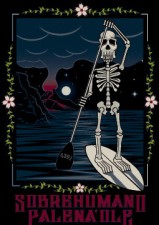 From Maui Brewing – This red ale, brewed with Liliko’l and Michigan cherries is ruby red in color, tart and refershing in flavor. Working with Ron is something I’ve wanted to do since I had my first Jolly Pumpkin Beer. Years later its a reality. Being involved on this project was an honor and a privilege. Mahalo to my MBC crew and to you, fans of craft beer. Aloha, John Walsh.  Yes, Michigan and Hawai’i are connected. It should be obvious to you know, as you hold this beer, and read this label. John and I designed this beer with two noble fruits from two noble states. Michigan & Hawaii. Cherries & Lilko’i. Starting to see the connection? I feel it. So does John. 4391 miles may separate our breweries, but not our thirst for the exquisite. Hipa! – Ron Jeffries

Appearance: Pours an amber brown with a micro film of bubbles.

Aroma: Bread crust and sour cherry. Light yeasty funk and passion fruit. It’s nothing like a cherry pie like beer or an air freshener, but it’s definitely there.

Overall:  Very unique, very refreshing for an amber, the fruit makes it extra enjoyable without making it “fruity.” Looking forward to the sour version.