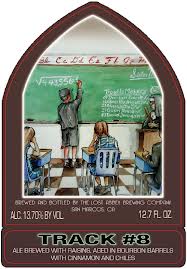 From The Lost Abbey – At a Glance The Beer: A fresh track, Track 8 is a spicy monster — A base of Judgment Day aged in freshly emptied bourbon barrels then spiked with liberal additions of cinnamon stick and dried chili pepper. ABV: 13.7% Released: August 18, 2012 Liner Notes We’ve never released a Bourbon Barrel version of our Judgment Day. So we thought it might be interesting to take the base beer for Cuvee de Tomme age in first fill Bourbon Barrels and let mother nature take over. Of course, because this is a Rock and Roll inspired Box Set beer, we couldn’t just leave well enough alone. Upon sampling the base beer, it became apparent that the raisins used to brew the base beer were going to drive the flavor bus of this beer. The conversations turned to Oatmeal Raisin cookies and the essence of a freshly baked treat. So we added some cinnamon sticks to the barrels and threw in some dried chiles as well. At 13.70 ABV this beer has amazing depth of flavor and presents a unique drinking experience for consumers who may be seeking enlightenment on Judgment Day.

Appearance: Pours an amber brown with a micro stripe of bubbles atop.

Overall: I thought this beer was too big and harsh when it was released, but see some potential for it by this same time next year. Great flavor profile, just too hot with too much bite.