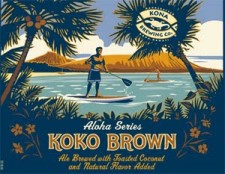 From Kona Brewing – Koko Brown Ale’s nutty aroma and flavor comes from real toasted coconut brewed into each batch. It was first tapped at Kona’s Kailua-Kona pub in the summer of 2009 under the name Coco Loco.

Appearance: Pours a deep amber brown with a thin swirly layer of froth atop.