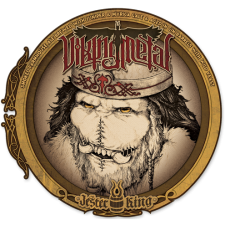 From Jester King – Viking Metal is our rendition of an ancient Swedish farmhouse ale called Gotlandsdricka, which we aged in Old Tom gin barrels for several months with wild yeast and souring bacteria. Gotlandsdricka was brewed with birchwood smoked malt (smoked in house), juniper and Myrica gale. After primary fermentation with farmhouse yeast, we racked the beer to oak barrels previously containing Old Tom gin and inoculated it with mature barrel aged beer, containing wild yeast and souring bacteria. After seven months of oak fermentation and maturation, we blended the barrels and naturally conditioned the beer for an additional six weeks prior to release.

Overall: A very fun, unique beer to try. If given the chance, I would have had a few more glasses of it. So much going on, I’d need a few rounds with this beer to let it all sink in.