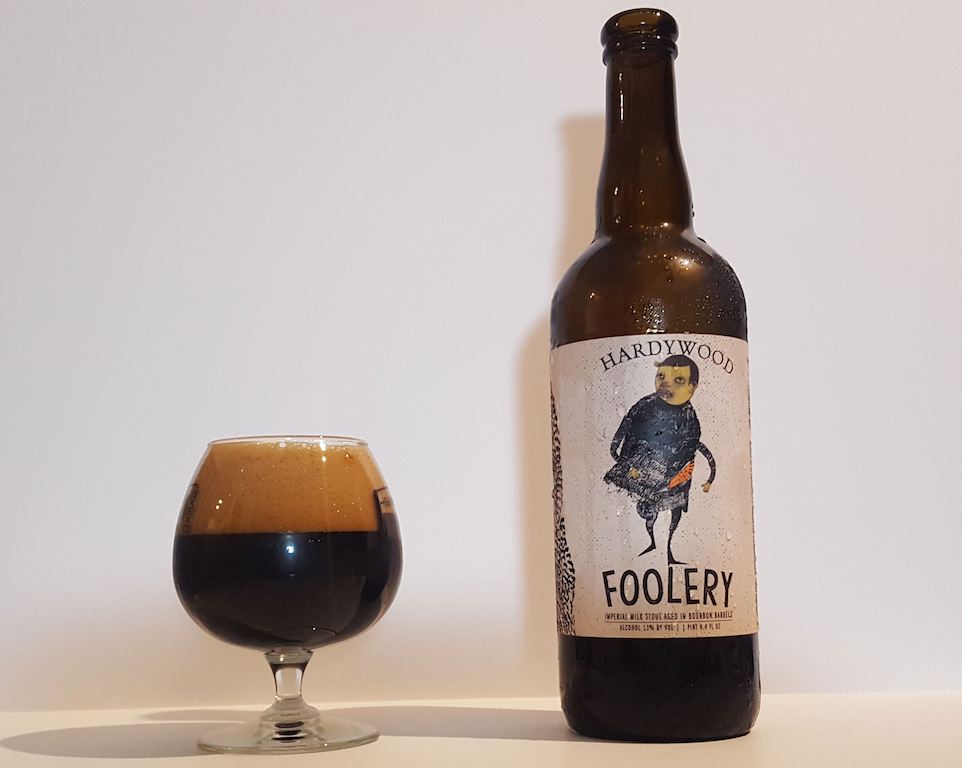 Poured from a corked & caged 750ml bottle, Foolery is ink black colored going into the snifter and generates an enormous, dark brown head of foam that lasts for several minutes. With a swirl of the glass, this beer has an intense staining effect along the edges. Wow!

The aroma begins with a powerful s’mores character with graham cracker and milk chocolate. Warming up, I get hints of bourbon barrel, waxy chocolate, and touches of vanilla; but mostly it transforms into pure sugar. Oh boy.

Flavor-wise, this is a massive beer. The body is super rich, creamy, and heavy-handed on the sugar. The lactose addition takes the sweetness over the top for me with a desperate need for something else for balance. That something else could be wood tannins from the barrel aging or some intense bitterness, but it ends up being the 13% ABV, which thins out the beer enough to not taste too sticky sweet. It’s not my favorite combination, so this one ends up being a slow sipper.

Since this is a big beer in a big bottle, again I called in backup from my beer tasting group to get their take on this one. They sampled it blind and I also kept my thoughts about the beer hidden from them until after they had shared their take on it.

One reviewer got an aroma of cocoa and molasses and couldn’t get much out of the flavor besides sugar. Another got more tobacco and maple from the nose and didn’t note the ABV but did similarly note the heavy sugar component. A third noted chocolate and port wine in the aroma and described the flavor as creamy, vanilla, chocolate, and fortified with the heavy-duty ABV readily apparent.

I think the overall message was that the beer didn’t have assertive bourbon barrel qualities and that the flavor was just too sweet. With that said, everyone did enjoy the beer; it was just a very intense sipper of a dessert stout.

So, there are definitely some areas where this beer could improve: intensified bourbon barrel character, less ABV, less lactose, and higher bitterness. For now, make sure this beer is shared in a large group and save it for dessert.