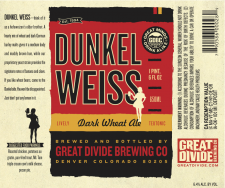 From Great Divide Brewing – Think of it as hefeweizen’s older brother. A hearty mix of wheat and dark German barley malts gives it a medium body and muddy brown hue, while our proprietary yeast strain strain provides the signature notes of banana and clove. If you like wheat beers, come to the Dunkel side. You won’t be disappointed. Just don’t put an lemon in it.

Appearance: Pours a auburn/mahogany red with a sturdy white strip of foam at the top.

Taste: Roasted caramel and wheat. Has some pear and banana fruitiness.  Light traces of banana and mildly bitter hops in the finish.

Overall: I was looking for something bolder and heartier with this beer.  It’s very tame in my opinion.