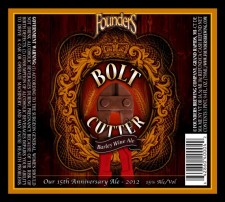 From Founders – Made to Celebrate Founders 15th Anniversary, Bolt Cutter Barley Wine is an American barley wine that pours deep copper color and is strong, sweet and malt-forward, with a spicy complexity. Typical of the style, it is very cellarable. The final product is a blend using beer that was aged in Bourbon barrels, some from aged maple syrup Bourbon barrels and some from standard fermentation. After blending, the beer was allowed to mature in bottles and kegs for a few months before releasing.

Appearance:  Pours a bright orange amber with a soapy ring of white and a thin film.