Product description: We proudly present the 2017 Vintage of Bravo, our Imperial Brown Ale aged in retired American oak bourbon barrels. Although Bravo was the first strong ale brewed for our Anniversary Ale blending program over ten years ago, it has yet to see its own bottled release, until now. Balancing rich toasty and chocolate malt flavors with a gentle balance of noble hops, Bravo is brewed to showcase barrel flavors with massive bourbon barrel notes that morph as the beer warms in the glass. 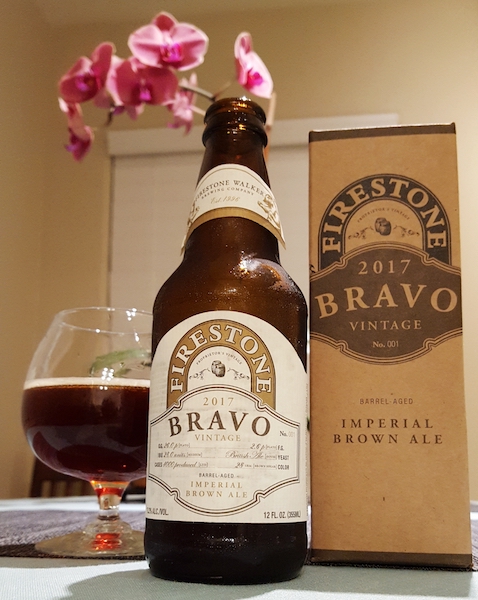 $13 for a single 12oz bottle. Is it worth it? Bravo marks the latest in Firestone Walker releasing some of the individual component beers blended together each year for their Anniversary strong ale. Stickee Monkee and Helldorado are other examples from these component releases. However, FW is transitioning these strong ales from 22oz bombers to 12oz bottles, which I personally like since it makes the beer less of an “occasion” to crack open. Especially with something like Parabola, this change is awesome.

Clear, deep maroon in the snifter, Bravo has short-lived yellow foam that settles down to nothing. The beer has very low carbonation – looking like dark rum in the glass. Some sediment-like chunks settle to the bottom. The nose is rich and immediately American strong ale in profile with thicker sugar, maple, Twizzlers, fall leaves, toffee, and caramel. Pungent but beautiful dark alcohol fills the air with a barrel aroma is closer to cognac than bourbon. There’s a commanding presence here.

The flavor begins with predictable maple, caramel, and toffee moving to strong warming alcohol. But there is no cloying sweetness or oxidized character that is common with barrel-aged strong ales. Rather, this beer is surprisingly dry with grainy wood tannins. The finish is quick and neutral – again uncommon for this style.

This may be one of the few beers I’ve ever had where the finish is the high point of the experience. It is amazing to have such a rich beer in aroma and flavor seemingly evaporate in your mouth with no lingering sweetness or alcohol. As it warms, the mouthfeel seems to transform into something silkier like melted cocoa butter. Whoa. I passed some samples around and it was universally praised.

With just a few sips, the flavor is immediately recognizable as one of the integral components of FW’s Anniversary strong ales. And I can see where blending this with something roasty or bitter really creates some magic. But Bravo is an exquisite beer in its own right.