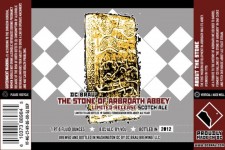 Overall:  A very tasty beer, and the best beer I’ve had from DC Brau. This beer was ready for prime time when I cracked it last month, but I would be interested to see how this develops.