Product description: Tropical fruit meets tropical vibes in this “guavacated” version of our Islander IPA. Brewed with the classic West Coast combo of Centennial, Chinook and Columbus hops, this beer gets the tropical treatment with a hefty dose of fresh guava puree. The result is a surprisingly smooth, unfiltered IPA bursting with tropical goodness that’s sure to put you in that island state of mind. 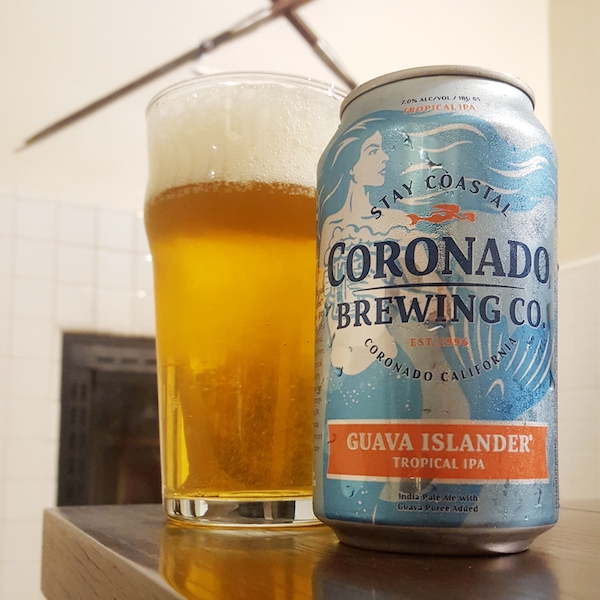 Guava Islander is a new core brand from Coronado that’s readily available in 6-packs of 12oz cans. The canning date is clearly marked on the outside carton and on the can bottoms, which is fantastic. This is a big advantage over local rival Green Flash. I snagged some of the Guava two weeks post-canning, which is pretty solid. This recipe is essentially their normal Islander IPA with fresh guava puree added. First introduced last year, my guess is that this was inspired by Ballast Point’s major success with Grapefruit Sculpin, which brought fruit IPAs into the limelight. My main concern is that Coronado’s new cans look very nice, but I can only see seltzer water branding with the silver and light blue water effects design. This is not just for Guava Islander but for all the current can lineup.

From the 12oz can, this is crystal clear golden into the glass with roaring carbonation that generates a thick, white meringue top of foam that persists for a solid 10 minutes or more. The aroma blasts thick guava paste during pouring. Once in the glass, the nose is subdued with freshly-cut grass, honey malt, perfume, and mint. The flavor is nicely balanced with a malty and thick base beer with some mid-palate chalk and mineral character drying it out. The finish is clean and simple with thick grains like oatmeal and just touches of sweet guava for balance.

There’s not much in the way of aroma or kettle/bittering hop character here with IBUs that seem in the 20 to 30 range even though it is listed at 65. *head scratch* Mostly I get the bright and crisp malt base out of this beer with touches of guava here and there, but it’s not enough for me to mention fruit adjunct if I sampled it blind. It’s super mild for an IPA and super mild on the fruit addition.

I would recommend this to just about any beer drinker, especially those that shy away from IPAs. This isn’t much of an IPA in my opinion as it lacks aggressive bitterness and hop aromas. It’s mostly a harmless blonde ale with light touches of sweet guava. I think even macro beer lovers could get down with this. That may even give it an advantage over competitor Grapefruit Sculpin. My main criticism is that the hop character is weak and the guava addition could be amped up tremendously. Other than that, the beer is well-constructed and very drinkable.