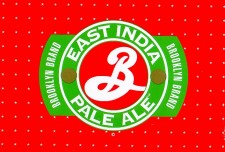 From Brooklyn Brewery – Brooklyn East India Pale Ale, originally a summer seasonal, has been getting raves since becoming a year round offering in 1996. Garrett Oliver, a student of English brewing and beer history, uses English malts and hops to brew his EIPA in the classic, heavily-hopped style of the 19th century beers created for British soldiers serving in India.

Appearance: Pours an amber gold with a very small cap of white.

Overall:  While nothing like the IPA’s I seek out/enjoy, this is a tasty beer. I wish I was able to compare this to what was brewed back then, so until my time machine gets out of the shop, I will take Brooklyn’s word for it.