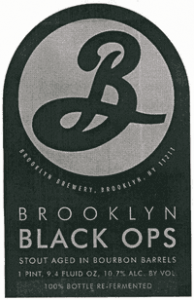 From Brooklyn Brewery – Barrel-aged in Woodford Reserve bottles. Brooklyn Black Ops does not exist. However, if it did exist, it would be a robust stout concocted by the Brooklyn brewing team under cover of secrecy and hidden from everyone else at the brewery. Supposedly, “Black Ops” was aged for four months in bourbon barrels, bottled flat, and re-fermented with Champagne yeast, creating big chocolate and coffee flavors with a rich underpinning of vanilla-like oak notes.

Appearance: Pours a dark brown with no head. A few white swirls as you look down on it.

Mouthfeel:  Thinner than I remember of fresh samples, silky with low carbonation.

Overall: A big time treat to try this beer. I think it’s a bit better fresher, but so far has aged gracefully.