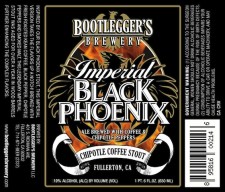 From Bootlegger’s – Inspired by our Black Phoenix Stout, this Imperial version takes the flavors up a notch! Brewed with fresh roasted Kean coffee, black pepper, chipotle peppers and smoked malt, this legendary Imperial Stout was aged for over a year in Wood Barrels, further enhancing the complex flavors.

Appearance: Pours black with a small tan head that subsides to nothing. Not even swirls or film.

Overall: Awesomeness.  We tried previous pilot batches at the brewery, and they weren’t aged over year like this batch. This was an excellent rendition of a barrel aged imperial stout, and is set a part from the rest with the chipotle profile added to the mix. Hopefully there’s more resting in barrels, I’m ready for batch 2.