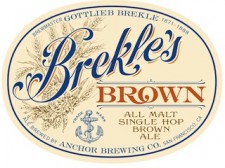 From Anchor – Brewmaster Mark Carpenter’s unique recipe for Brekle’s Brown—a tip of the hat to our first brewmaster—looks to both the past and the future. Mark’s special blend of roasted malts, inspired by the all-malt brown ales in Anchor’s brewing archives, gives Brekle’s Brown its coppery brown color and its unusual depth of flavor—richness and complexity without heaviness. For brewing and dry hopping, Mark has chosen a single, American hop variety called Citra. The subtly entrancing flavors and aromas of this distinctive new hop perfectly complement the unique maltiness of Brekle’s Brown.

Appearance: Pours a translucent dark red with an off white film atop.

Aroma: Caramel, fruity yeast, burnt toast and light nail polish remover. Citra did not come through in the nose, which is its only use for me.

Overall: Not too shabby, nothing like a typical American Brown, but more like Anchor Porter with 25% of the malt richness taken away.