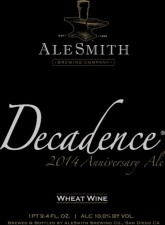 From AleSmith Brewing – AleSmith Decadence Anniversary Ale was originally brewed in 2005 to celebrate our first decade in business. Our brewers had such a great time creating it that they decided to brew a new style each year to commemorate our anniversary. Now, nineteen years after we started, we’re proud to present another great addition this ongoing series, AleSmith Decadence 2014 is our interpretation of a Wheat Wine Style Ale. The generous amounts of wheat used in the his beer impart a bready aroma with hints of honey, ripe fruit, and a spicy graininess. In the finish, a pleasant malty sweetness from the wheat is balanced by the addition of German and American hops. Enjoy this special brew now or age it at a cool temperature for a truly rewarding experience.

Appearance:  Pours a dark peach with a fluffy AleSmith head that surprisingly fades to nothing.

Overall: An interesting offering that sets itself apart from the Old Ale and other Barleywine offerings over the past few years in the Decadence lineup. I’m very curious to see how this beer ages.