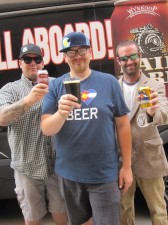 Our beery world here at Wynkoop Brewing Company is more of an art world than a beer world. What we really make is liquid art. Not “beer.”

But as it does for any artist, our art world collides with the world of commerce. And we have some exciting info to report on the commercial side of our artistic endeavors.

Granted, sometimes it seems our increasingly successful beer trade is a bit obsessed with growth numbers and barrelage figures. It can make us sound like bean counters, not beer artists.

But success is something to celebrate, so we want to take a moment to toast the giant increase in the embracing of our creations.

Most of all, we want to thank our fans and retailers for this wonderful progress. Thank you all very much for your crucial role in making this good news possible.

These days our small-batch, locally minded art is giving goosebumps to a whole new audience. That’s especially satisfying for us as we head for our 25th birthday this October.

How do we explain it? Some of the credit goes to our ever-improving beer list, a hustling sales & distribution force, and a scrappy band of brewers who are keeping the beer flowing.

“For the past five years we’ve been on a mission to redefine what makes a “Wynkoop” beer,” says Wynkoop head brewer Andy Brown. “We’ve retired some beers from our past and renamed and revised others. Best of all, we’ve created a collection of new beers that blow up expectations, challenge and thrill new fans, and live up to our brewery’s trailblazing history.”

(As you may know, the Brewers Association’s annual award for trailblazing brewers is called the Russell Schehrer Innovation Award, named for our late and very great first brewer.)

“We really make a wide spectrum of beer styles, and that has kept us on our toes juggling it all,” Brown adds. “I think we have a high-quality beer to offer almost any discerning drinker, and that has been fueling the demand.”

Better still, our small-but-scrappy sales & delivery force (beer ambassadors Dan Appell and Matt Labate and delivery ace CJ Fishler) has done a smoking job of getting that beer to our stores and growing congregation.

These savvy dudes have built a solid roster of accounts in the Denver/Boulder area and delivered great service to our beloved retailers. They’ve also made sure that we’ve enjoyed an increased interest in our existing accounts and in a flood of new draft accounts. Cheers to CJ, Dan and Matt!

More news: We’re now landing new Wynkoop fans up north thanks to our newly expanded reach into the Fort Collins area. Our beers are now on shelves in A-List of stores there, in the first expansion of our Denver/Boulder distribution area.

We’re thrilled to have our mighty creations in the land of such beery heroes as New Belgium and Odell Brewing, and among the growing crop of microbrewing newcomers and fine-beer vendors in Fort Collins.

Okay, enough back patting. Pardon the self-congratulations break. Everybody back to art work!

And thanks again to all of you fans and retailers for making our first half of the year so fun and successful. We owe you. – Marty Jones.