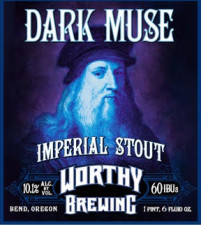 (Bend, OR) – In the spirit of colder months and introspection, Worthy Brewing is releasing the third vintage of Dark Muse Imperial Stout, their annual high gravity, small batch brew.

At 10.1% ABV, this monster stout is smooth and dark with a rich body, roasty character and velvety brown head. Notes of anise, extra dark chocolate and coffee finish warm, but not boozy. A touch of bitterness rounds out the 60 IBUs with a supremely rich mouthfeel. Worthy’s brewmaster, Dustin Kellner, considers Dark Muse to be the ultimate cold weather beer, meant to warm the body and awaken the soul with the first sip.

A release party with food pairings and a vertical flight of 2014 and 2015 Dark Muse is planned for Saturday, December 18 at Worthy’s pub. The very limited release of 22-ounce bottles is ready to drink now and will also benefit from cellaring. The bottles will be distributed by Columbia Distribution in Oregon and Washington and by Hayden Beverage in Idaho.

Worthy Brewing Company opened its doors in early 2013, delivering remarkably balanced, filtered ales that are hand-crafted using premium ingredients and the pristine water from the Cascade Mountains in Bend, Oregon. Worthy’s campus includes a large outdoor biergarten, full restaurant, and a greenhouse and hop yard onsite for growing estate and experimental hops in conjunction with Oregon State University and Indie Hops. An expansion with expanded restaurant seating, a banquet space, and an observatory is planned for Spring 2016.