Blacklight IPA is the first of six Widmer Brothers limited release collaboration beers with Oregon breweries to be released this year as part of a series that commemorates Widmer Brothers’ 30 years of brewing beer. The collaboration series is a celebration of the brewery’s 30th anniversary, the Oregon brewing community and the unique camaraderie between craft brewers. 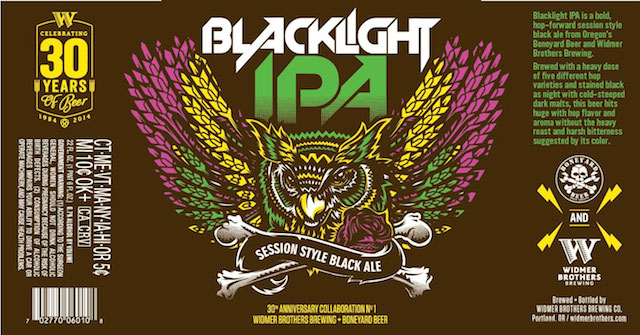 “Oregon is home to the best craft beer scene in the country and it’s amazing how tight knit the community really is,” said Ben Dobler, innovation brewer at Widmer Brothers. “I’ve known (Boneyard Brewmaster) Tony Lawrence for more than 17 years, so when we came up with the idea for the 30th Anniversary Collaboration Series, Boneyard was one of the first breweries that came to mind. We landed on the session style black ale idea for Blacklight IPA pretty quickly, as it’s a perfect blend of the two breweries’ styles.”

Blacklight IPA is a hop-forward, sessionable 4.2 percent ABV black ale with a heavy dose of five different hop varieties and stained black with cold-steeped dark malts. The beer focuses on big hop flavor and aroma, without the harsh bitterness and heavy roast that the beer’s dark color suggests.

“Widmer Brothers approached us about the 30th Anniversary Collaboration Series and we couldn’t pass up the opportunity,” said Tony Lawrence, co-owner and brewmaster of Boneyard Beer. “Widmer Brothers does so much for the Oregon brewing community and we were happy to be a part of the project. Plus, it will be the first time a beer of ours will be bottled and the first time Boneyard Beer will be available outside of the Pacific Northwest.”

Blacklight IPA will be available in the coming weeks in 22-ounce bottles and on draught, with limited distribution in select markets, including Portland, Seattle, San Francisco, San Diego, Minneapolis, New York City, Boston, and Philadelphia.

The next beer in the 30th Anniversary Collaboration Series will be a beer brewed with Portland’s Breakside Brewing and will be available in late May.

Blacklight IPA is a bold, hop-forward session style black ale from Oregon’s Boneyard Beer and Widmer Brothers Brewing. Brewed with a heavy dose of five different hops varieties and stained black as night with cold-steeped dark malts, this beer hits huge with hop flavor and aroma without the heavy roast and harsh bitterness suggested by its color.

In 2010, Boneyard Beer was started with one goal in mind…make great beer. However, the major hurdle was how to do so in large quantities without large sums of money. The solution was simple: you pull from the boneyard.

After a couple of decades in the brewing industry, owner, Tony Lawrence, built up a “boneyard” of old equipment he collected from 13 different breweries around the country. Along with co-founders Clay and Melodee Storey, this second-hand brewing equipment was reconfigured to produce the first batch of Boneyard Beer in April 2010.

Based in Bend, Ore., Boneyard currently brews on a 20-barrel system and only distributes draft beer for sale in Oregon and Washington. However, the brewery is in the middle of a 15,000 square foot expansion at a new location that will more than double production. For more information, visit www.BoneyardBeer.com, or stop by the tasting room in Bend to sample some ales.