(Lexington,KY) – Today, we’re excited to announce the return of one of our fan favorites: the West Sixth Christmas Ale!

Last year, we launched this in very limited quantities, and it was a wild success! We sold out of almost all of the beer in just 24 hours.

This year, we’ve been planning further ahead, so we’ve been able to make a bit more of it – but based on last year, we have no idea how long it will last! 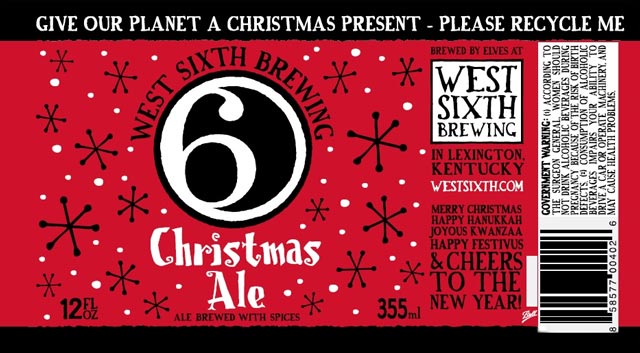 We’re going to release the Christmas Ale on draft and in 6-packs on Monday November 17th at 4pm in the taproom. It will also be available at retailers around the state and in Cincinnati.

We’ll have special giveaways for our launch, so you aren’t going to want to miss it!

For those who didn’t get a chance to try it last year, the West Sixth Christmas Ale is a spiced ale with aroma of cinnamon and nutmeg with a sturdy malt backbone that will hold up to the chilliest of nights.

It’s a higher gravity beer weighing in at 9% ABV. This is our slightly darker take on a holiday beer – perfect for evenings by the fire.

Come on down, and help us kick off the holiday season right!

See you on November 17th –
Ben, Brady, Joe and Robin
Your friends from West Sixth

PS – Did you know that we mail out a special Christmas present every year for all of our Trailblazers? To get one, all we need to know is your address — and you can give it to us here!