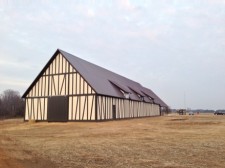 Fennville, MI – Virtue Cider unveils its first cider house and is now pressing apples at its 48-acre farm in Fennville, Michigan. Designed by Chicago-based architects, Boeman Design, the cider house evokes the character of farms and cider houses in Normandy, France and is the first of several buildings planned for the property.

The building houses the apple press, fermentation tanks and a small bottle shop and tasting room that will be open to the public starting in January 2013 for tastings and purchase of Virtue’s various ciders, including their just-released Norman-style Lapinette, a cidre brut aged in French oak barrels.

Lapinette is also available in draft format at restaurants and bars in the Chicago area (a full list of locations is below) and will soon be distributed in SW Michigan, New York City, and Portland, Oregon.
Virtue is the hard cider venture, launched in June 2012 by Gregory Hall, former Brewmaster at Goose Island Brewing Company, and co-founder Stephen Schmakel. A branch-to-bottle enterprise, Virtue’s mission is to make a series of English, French and Spanish style ciders that pair well with food and support small farmers, using the highest quality heirloom apple varieties while supporting the local agricultural community.

Southwest Michigan is an obvious choice for Virtue Farms. The third largest producer of apples in the nation, Michigan boasts the apple blossom as its state flower. About 37,000 acres are used for apple production, with the majority of farms covering less than 200 acres, and 950 apple growers living and working in regions near Lake Michigan along the western part of the state

Virtue purchased a 48-acre farm in Fennville, Michigan in March 2012 with the vision of creating a sustainable, authentic cider house experience where guests could tour the farm and taste locally made ciders.

Boeman Design worked closely with Michigan-based Darpel and Associates and Wedeven Brothers Construction to realize Virtue’s vision — to evoke the character of farms and cider houses in Normandy, France with a strong dedication to sustainability, using local contractors, local materials and resources.

The steep roof and proportions of Cider House No. 1 are drawn from the barns of Normandy. While the hardie board siding with rough sawn locally harvested Michigan White Pine evoke the half-timber construction that is the signature character of an authentic Norman barn. The barn utilizes a familiar agricultural pole barn construction with each element reconsidered for its environmental impact. Sustainable wood was employed for the trusses and columns, fly ash in the concrete and energy star rated metal roofing. Skylights were added to reduce the lighting needs in the barn.

Visitors can see first-hand the process of pressing apples, taste a truly authentic cider, and soon purchase bottles (750ml) of Virtue Cider to take home. The shop also carries beautifully crafted Virtue Cider ceramic mugs made by local artists at the Khnemu Studio on Fernwood Farm as well as assorted Virtue apparel. The cider house and bottle shop will be open Friday and Saturday from 12:00pm to 7:00pm and Sunday from 12:00pm to 5:00pm starting in January 2013. The cider house is located at 2170 62nd Street, Fennville, MI 49408.
Lapinette
Inspired by the rustic, unfiltered ciders of years past in Normandy, Lapinette captures the essence and flavor of another era. In the years before the great wars, winemakers in the south of France shared their used barrels with their northern counterparts. This fraternal trading produced ciders that were a little bit rough, unfiltered with a balance of flavors from the fruit, the farm and the barrel.

To recreate this traditional cider, Virtue sourced tart fruit from local family farms in Illinois and Michigan. After aging for months in French oak wine barrels, Lapinette is served au natural–without fine filtration. The 6.2% ABV cider has a complex nose with elevated tannin and acidity. It pairs well with a variety of foods—from roast chicken and pork to aromatic French cheese to rich seafood dishes.

The Virtue Story
Hall’s interest in cider started long before he stepped down as brewmaster at Goose Island in the spring of 2011, a position he held for 20 years. Over a decade ago, in 2000, while traveling in England with a group of brewers, Hall came across a cider festival and was deeply impressed by the range of styles and quality of ciders. The seed was officially planted and he had been thinking of doing premium quality, complex ciders ever since.

“Right now cider is in an embryonic stage in the United States, basically where craft beer was when I started brewing in 1988,” explains Hall. “Cider is a great beverage with a lot of history in this country. And while there are many American farmstead cider makers producing great cider today, most consumers don’t have access to good cider like they do with craft beer, wine and spirits. I plan to help change this with Virtue.”