(Downingtown, PA) – Victory Brewing Company (Victory) unveils a fresh, new design for their extremely popular pilsner, Prima Pils. Prima, a year-round brand available on draft and in 12 oz. bottles, is now available in cans, making it easier than ever to reach Pils Perfection. 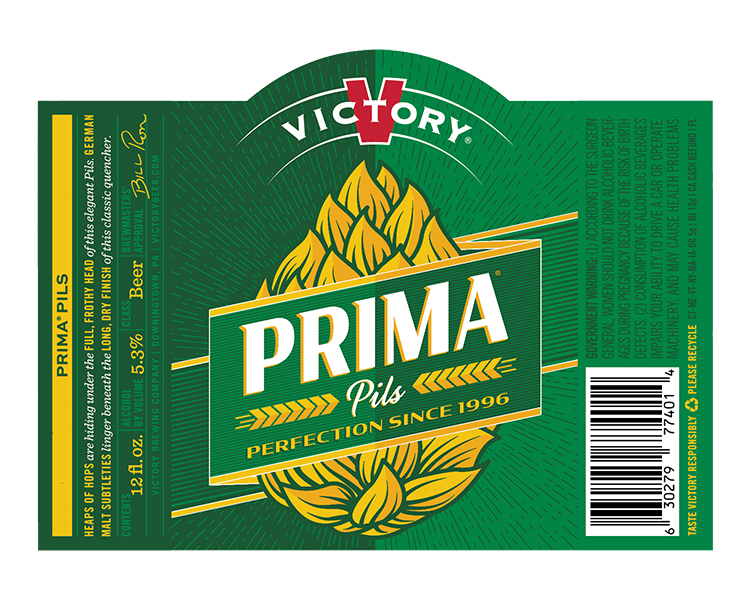 “With the decision to put Prima in cans, creating ‘portable Pils perfection,’ we decided to refresh the label, too,” said Victory’s co-founder and Brewmaster, Bill Covaleski. “The liquid is the same as it’s been for 20 years but we wanted to brighten the label and boldly state what our loyal fans have been saying for decades: ‘PRIMA PILS PERFECTION SINCE 1996.’”

Victory’s Prima continues to be a beer-lover’s fridge staple despite a steady stream of new, seasonal and experimental releases from craft brewers (Victory included!) everyday. After 20 years, the changes to the Prima Pils label are small but significant. The color palette remains green and gold and the hop remains the focal point. The text proclaiming “Prima” – a German exclamation of joy – in bold, white letters and the new tag, “Perfection since 1996,” wrap across the whole flower hop. The new artwork appears on Prima Pils bottles, tap handles and the newly released cans.

Prima Pils is consistently ranked among the highest rated American made German pilsners and is the liquid embodiment of Victory’s dedication to crafting traditional, European beers with American ingenuity. Prima’s popularity comes from its masterful balance of a bracing, herbal bite provided by heaps of whole flower German and Czech hops with smooth malt flavors resulting in a long, dry finish. At 5.3% ABV, it’s a quencher that satisfies year round.

Watch Director of Brewery Operations, Adam Bartles, talk about what makes Prima Pils his “desert island beer” and the legacy this perfect pilsner has had on the brewing industry as a whole, here.

Available throughout Victory’s 37 state distribution footprint, Prima Pils suggested retail price is $9.99 for a six-pack of 12 oz. bottles or cans. Use Victory’s Beerfinder to find Pils Perfection near you.