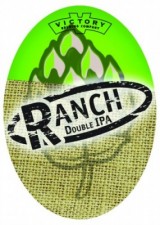 Following suit with many other brewers, Victory Brewing has announced a tasty experimental series called Ranch Double IPA, in which they will brew a base Double IPA that will alter from batch to batch depending on the hops used. Here’s more info from Victory’s Blog.

Hoppiness is happiness. If you’ve tried any of our Ranch Double IPA brews, we think you’ll agree.

We’ve got a number of hop-tastic beers in our portfolio, and now we’re playing around with another hop-heavy recipe. With Ranch Double IPA, we’re differentiating from other hoppy beers we make (and the standard double IPAs other breweries make) by focusing on hop aroma over hop bitterness and by changing up the hop varieties being used.

Similar to our Braumeister Pils series, the Ranch series features a fixed Double IPA recipe, with the exception of the hops, which we vary with each brew in order to highlight different characteristics of hop varieties.

The Ranch name comes from the fact that we’re working with family-owned hop farms/ranches to source traditional and experimental hops for this recipe. We’ve had great relationships with a number of small hop farms for years. Now, we are thrilled to be able to feature each farm’s hops in this special project.

The hop farmers seem equally as excited by the series. Here’s what they had to say…

“The Segal Ranch was flattered and honored to have our high oil cascades featured in your first Ranch Ale!  It is a wonderful idea and a delicious DIPA! Plus it is a nice story for your customers to learn about while they are drinking. Having a direct relationship with a hop grower where you can see your hops in the ground, custom-grown for your brewery, is exciting!  It’s like going to the farmer’s market on a Saturday and developing a relationship with a local vegetable farmer. You know where your food comes from.”
~John Segal of Segal Ranch. Our very first Ranch recipe was called “Ranch S IPA” and featured cascades from Segal Ranch.

“It’s great that Victory actually cares enough about their raw materials to send the Brewmaster all the way to Yakima to check on quality. Everyone knows that hops are essential to beer but few people know what it takes to get them to a brewer. Being recognized as a contributor of a Victory beer is rewarding.”
~Jim Boyd of Roy Farms. Our second Ranch recipe was called “Ranch R” and featured centennials from Roy Farms. There will be another version with cascades from Roy Farms.

“As members of the hop growing community, our family is somewhat unique as our ancestors were the first to grow hops in the Yakima Valley of Washington State. The sole use of our whole flower hops for Victory’s brew is a great way to expose the distinctive flavors imparted from hops grown on our farm.”
~ Brad Carpenter of Carpenter Ranches. We released a Ranch Double IPA made with a combination of simcoe and citra hops from Carpenter Ranches.

“As a hop breeder and farmer, I appreciate every opportunity to work directly with breweries, especially with regard to experimental hop varieties. Victory’s farm-focused double IPA allows these hops to be tested from the field to the consumer. That creates a great experience for all involved.”
~Jason Perrault of Perrault Farms. One iteration of Ranch Double IPA featured the experimental HBC 369 variety.

We will continue to brew versions of Ranch Double IPA with different hop varieties. One day, we may discover a combination that wow us (and you) so much that it becomes a year-round offering. Use our beerfinder to track down Ranch Double IPA near you.