Upland Brewing Will Offer Sour Beers in Boston Next Spring 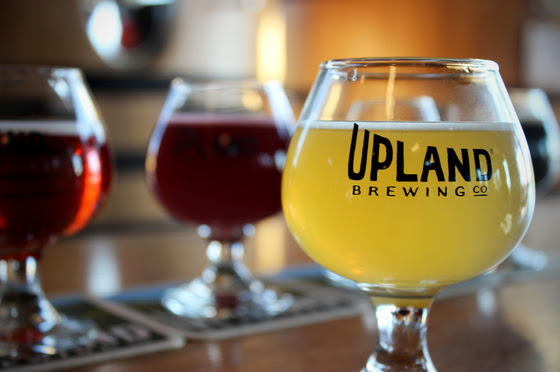 “Upland Brewing Co. is one of the O.G. American breweries that committed to pioneering authentic Belgian-style and American-style sours years ago. The array of styles and flavors from their sour portfolio is absolutely amazing, and we know that the savvy beer connoisseur in Boston and throughout Massachusetts will appreciate and recognize the commitment and process Doug Dayhoff and his team have put into doing things the right way,” said Brian Murphy, Director of Sales & Marketing for Massachusetts Beverage Alliance.

The first Upland sours to travel from the Midwest to the Atlantic coastline are Hopsynth, with a distinct flavor profile of fresh hops and tartness, and Revive—a tart, tropical ale aged with pineapple and chamomile. Both will be available in 500ml bottles and ⅙ bbl kegs along with other limited kegs of sour ales.

Since 2006, Upland has been concocting bold recipes with unexpected ingredients within the sour beer craft, leading to award-winning brews as well as a loyal following from their online lottery and Secret Barrel Society, a membership group serving as ambassadors for the program.

“We started our sour program ten years ago, trying to emulate the great Belgian sours that we loved,” said Upland’s President Doug Dayhoff. “The success of our online lottery and Secret Barrel Society proves that craft beer devotees are interested in new experiences, but not in a faddish way. With the Wood Shop expansion, we’re still giving our longtime fans access to exclusive small batches while introducing some of our sour beers to those who have not previously had access.”

Hopsynth and Revive can be found in select bottle shops and bars in Boston and throughout Massachusetts, in addition to the Midwest.

About the Brewery: Located in Bloomington, Indiana, Upland Brewing Co. began its intriguing story in 1998 with a mission to brew remarkable beers in remarkable ways, staying true to the artisan, progressive spirit found in our part of the Midwest. Our sour program began in 2006 as a way to entertain our curious brewers looking for innovative flavor combinations. Now the third largest brewery in Indiana, we brew more than 50 different styles of beer annually.