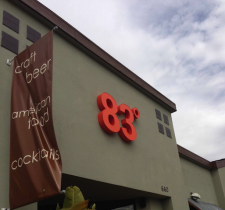 We reported 3 weeks ago that 38 Degree’s Alehouse and Grill was blindsided by the news that a North San Diego County restaurant owner took the name 38 Degrees, and many of it’s likenesses to rebrand his seafood restaurant into 38 Degrees Carlsbad.

After we posted that story, it became viral, and once the craft beer community got behind Clay Harding and his 38 Degrees Ale House and Grill of Alhambra, Mayur Pavagadhi, seemingly changed the name of his new establishment to 83 Degrees Carlsbad.

We were tipped last week, but didn’t have any evidence that the signage had been changed. Furthermore, Mr. Pavagadhi was sent a few cease and desist letters with no response indicating any actions had been taken.

Today, a thread began on BeerAdvocate.com in which a Carlsbad local snapped a picture supporting the notion Mr. Pavagadhi flipped the 3 and the 8 on his sign, to change the name to 83 Degrees Carlsbad.

We reached out to Mr. Pavagadhi to seek clarification, and to make sure this isn’t a hoax. “Yes, I have changed the name to 83 Degrees Carlsbad. The guy in Alhambra has made such a big deal about this, I just don’t want to deal with this any further. We are so far away from each-other, I’m still not understanding what the big deal is.  I am going to use this publicity that he has given me, and continue to launch, but as 83 Degrees rather than 38 Degrees. ” My next question was in regards to the website launched February 26th, 38degreescarlsbad.com . “I spent a good deal of time making t-shirts, making signs, menus, etc. I am obviously changing all of that now, the website was put up just as I decided to change the numbers around, so that will be next on my list of things to change.”

We reached out to Clay Harding of 38 Degrees Alhambra, to see if he heard the news and what this means to him. “We have sent two cease and desist letters to Mr. Pavagadhi’s lawyer, and have heard nothing back.  Until I have something in writing stating he will not be using the 38 name and colors, this is not settled.”