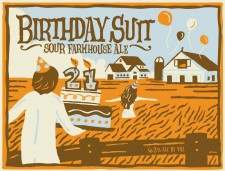 This is the third release of Uinta’s Birthday Suit, a brand developed to rotate in style and to be released annually in commemoration of another year brewing. While the Birthday Suit brand was not developed to be a ‘sour brand’, the tradition, thus far, has carried on. This year’s rendition of Birthday Suit is an unfiltered sour farmhouse ale that showcases a mix of underlying spice, zest and moderate tartness. Crisp and refreshing, Birthday Suit lets it all hang out with a citrusy sourness that is worth celebrating. Puckering and bright with an ABV of 6.3%, limited release 21st Birthday Suit is scheduled to hit shelves in late March.

Uinta Brewing Company embarked upon its mission of brewing world class, full-flavored, craft-brewed beer in 1993. Uinta is named after the only major east-west running mountain range located in the continental U.S. Since 1993, Uinta Brewing has created world class, full-flavored, craft-brewed beer ranging from 4.0% to over 13% alcohol by volume. The Uinta team comprised of outdoor and beer enthusiasts, brews a variety of beer organized in to three distinct lines; the Classic Line, Organic Line, and the Crooked Line.