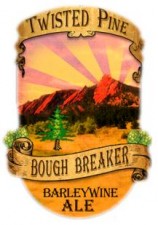 Boulder, Colorado – Twisted Pine Brewing Company unveiled Bough Breaker barleywine in front of a full house Saturday, July 16th at the brewery’s sixteenth anniversary party. Following up on the success of last year’s birthday beer, Hoppy Knight, the brewers chose to commemorate their sweet sixteen with an even bigger, bolder ale. “We’ve worked hard to get to where we are and as we continue to grow we’re able to brew and bottle more and more unique and original beers, Bough Breaker being the next of this series,” imparts brewery owner, Bob Baile.

A true American-style barleywine, Bough Breaker pours a deep, rich red with aromas of citrus hops, dark fruit and light toffee. While delectable to drink the day it’s bottled, Bough Breaker will only become more enchanting with age and cellaring. “At 9% ABV and 120 IBU, this beer is the perfect candidate for a lengthy rest in any beer lover’s basement,” offers Baile, who adds “but with a beer this tasty, the temptation to drink it right away is often too great.”

While Twisted Pine has brewed other barleywines in the past, these were simply small batches destined for distribution solely at the brewery’s ale house. Bough Breaker enjoys the distinction of being the first of its style packaged by the brewery for release throughout Colorado and several other states.

Based in Boulder, Colorado Twisted Pine Brewing Company has been handcrafting beer since 1995. They are the brewers of such favorites as “Hoppy Boy IPA,” “Raspberry Wheat Ale” and “Billy’s Chilies.” The Ale House is a very popular local hangout and boasts 17 taps, 5 rotating. Twisted Pine is active with local charitable organizations and a strong believer in sustainable business practices. You can find more information at www.twistedpinebrewing.com.