(Boulder, CO)  – The leaves have already turned and now litter lawns in and around Boulder, Colorado. To the brewers at Twisted Pine Brewing Company, this signals an exciting time of year – the annual release of Northstar Imperial Porter. 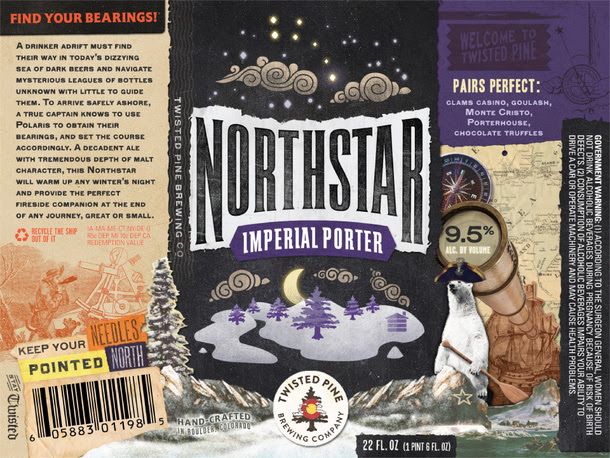 The renowned winter seasonal offering will be released at the brewery on Friday, 11/13, but a lucky few participants will have the opportunity to take part in a vertical tasting on Thursday the 12th that will span six different vintages of Northstar and include select small plate food pairings. Tickets to the tasting are extremely limited but can be purchased from Twisted Pine’s website while supplies last.

Rich and robust, Northstar clocks in at 9.5% ABV and serves as an exemplary winter warmer during the chillier months. The imperial porter has earned a healthy compliment of accolades over the years including a World Beer Cup, two European Beer Star awards and numerous medals from the Colorado State Fair. The beer carries a score of 97 on RateBeer.com, and is known to age quite gracefully in the cellar.

A copyright dispute arose earlier this year between the brewery and Chateau Ste. Michelle Wine Estates over naming rights, but has been amicably resolved and, with the winery’s permission, Twisted Pine will continue to use the name Northstar. The beer will be available in limited quantities of 22oz. bottles and on draft at the brewery’s ale house and select accounts throughout Colorado.

Based in Boulder, Colorado, Twisted Pine Brewing Company has been hand-crafting quality ales since 1995. In addition to such favorites as Hop Zealot, La Petite Saison and Billy’s Chilies, the brewery has repeatedly pushed the boundaries of style guidelines with such creations as Big Shot Espresso Stout, Northstar Imperial Porter and Ghost Face Killah. Twisted Pine is actively involved with local charitable organizations and is a staunch advocate of sustainable business practices. For more information, visit www.twistedpinebrewing.com.