Twin Leaf Brewery Releases I am The Magic Man This Friday

Asheville, NC — This Friday, October 11th, Twin Leaf Brewery will release their Milk Chocolate Pumpkin Stout, a 5.9% ABV stout brewed with fire-roasted pumpkin and squash varieties, cocoa nibs, and a medley of chocolate malts. This beer, which started in 2014 as an experimental small batch beer, has since turned into a highly anticipated seasonal tradition for Twin Leaf Brewery’s owner and head brewer, Tim Weber. 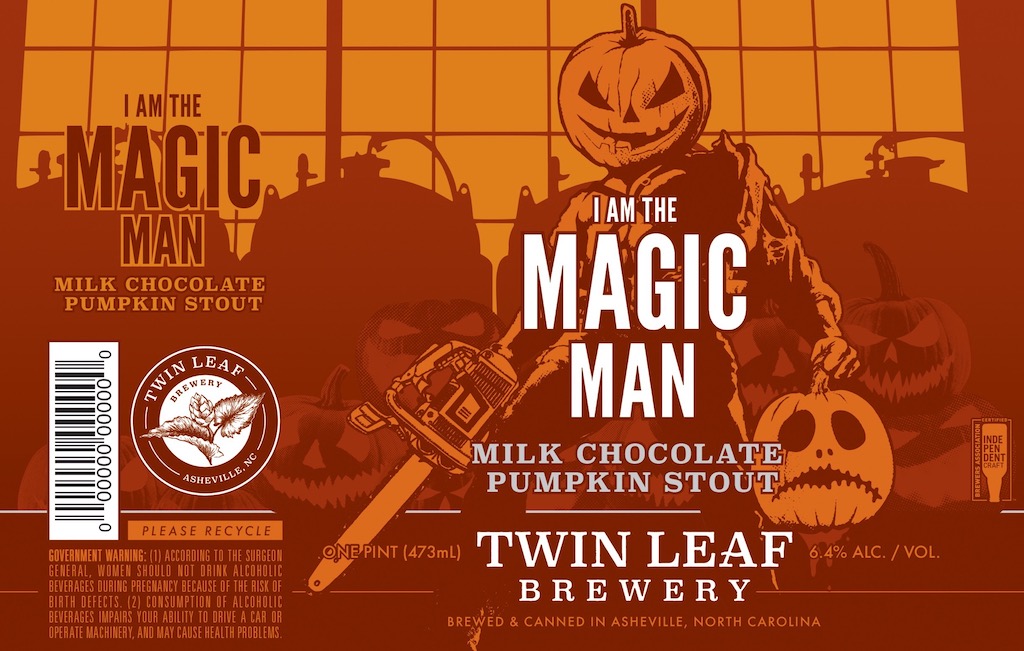 “I really look forward to brewing this beer every fall,” says Weber. “Spending the day with Michael Rayburn and Twin Leaf staff members, slow roasting pumpkins, just shootin’ the breeze, and taking in the scenery; it’s become one of my favorite traditions at Twin Leaf over the years.”

Every year, Twin Leaf’s Milk Chocolate Pumpkin Stout is crafted with locally-grown gourds that are slow-roasted for several hours in a huge fire pit at Barnardsville based Rayburn Farms. This year’s batch will feature 200 pounds of locally-sourced pumpkin, 100 pounds of local butternut squash, and 50 pounds of local candy roaster squash. Weber’s commitment to detail and local produce gives the beer a unique flavor profile compared to some of the more mainstream pumpkin beers in the market.

“What makes this beer standout is real pumpkin flavor,” comments Weber. “A lot of breweries make amber-style pumpkin ales that are over spiced and have very little actual pumpkin. I wanted to make a beer to showcase real pumpkin flavor, most of which is mouth feel, with a little creamy sweetness.”

Starting this year, this beloved pumpkin stout will be packaged in cans under the name I Am The Magic Man. Adorned in seasonal fall colors, the can’s illustration depicts a menacing pumpkin-headed figure — chainsaw in one hand and jack-o-’lantern in the other — with Twin Leaf’s iconic brewhouse silhouette in the background.

Starting at 2 pm on Friday, I Am The Magic Man will be available for purchase in 4 packs of 16 ounce cans and on draft at Twin Leaf Brewery’s taproom located at 144 Coxe Avenue in Asheville’s South Slope. In the following weeks, cans will also be available in a number of bottle shops, restaurants, and retailers in the surrounding area.

Twin Leaf Brewery is a 10-barrel brewery located in the South Slope region of Asheville, NC. Driven by the do-it-yourself spirit, Twin Leaf Brewing was hand-built by the owner and purveyor of the business and is committed to supporting the outdoor lifestyle of all the brewery employees through environmental conservation. Twin Leaf Brewery is best known for producing such flagship beers as 144 IPA, Luminosity Belgian Triple, and Magic Hour Gose as well as an ever-rotating selection of hand-crafted, one-off beers available only in their taproom. To learn more about the company, visit www.twinleafbrewery.com