(Asheville NC) – Twin Leaf Brewery will commemorate the coming summer season with the return of their Gathering of the Goses celebration. This annual event showcases a tap lineup of ten light and refreshing, gose-style brews from not only Twin Leaf, but seven other craft breweries from across the region. 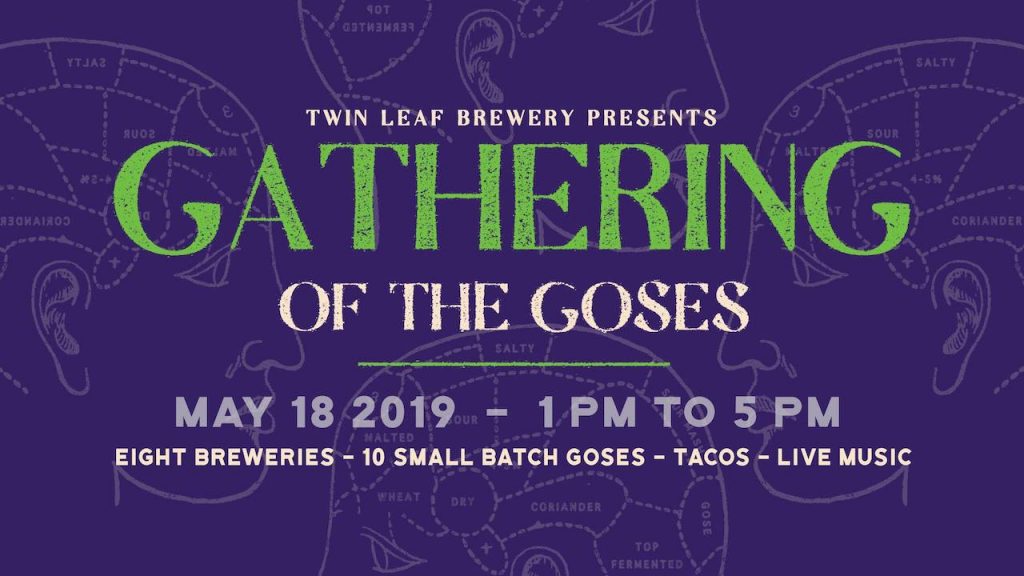 Head brewer and owner, Tim Weber, first discovered this almost forgotten, German-style brew a few years ago when it first began to rise in popularity across the craft brewing scene.

“At first, I thought gose was a pretty strange style,” Weber said. “But it quickly became one of my favorites. They’re the perfect summer session beer.”

He began brewing batch after batch of specialty goses, each one just a little more flavorful and adventurous than the last.

“Our customers and staff were so excited about all these new experimental session sours that we decided to have an official celebration dedicated to our new favorite style of beer.”

What started as a small inhouse celebration is set to grow exponentially year after year. The initial event featured a tap lineup of Twin Leaf’s original goses and a collaboration bottle release with neighbors and friends, Bhramari Brewing Company. This year Twin Leaf will kick things up a notch, with plans to showcase gose-style brews from Sideways Farm & Brewery, Botanist & Barrel, Steelstring Brewery, Brown Truck Brewery, Hi-Wire Brewing, Palmetto Brewing, and Bharami Brewing Company. Twin Leaf’s team is excited to bring some out of town beers to the South Slope masses, as well as highlight some of their favorite Asheville-based breweries.

The event will be Saturday, May 18 from 1 PM – 5 PM. Festivities will include live music throughout the day and gourmet tacos from a local pop-up kitchen. The $15 ticket fee includes entry into the event, two drink tokens to be used towards the lineup of small-batched beers, and a specialty sampling glass. Tickets are currently still available through Twin Leaf’s website.

Twin Leaf Brewery is a 10-barrel brewery located in the South Slope region of Asheville, NC. Driven by the do-it-yourself spirit, Twin Leaf Brewing was hand built by the owner and purveyor of the business and is committed to supporting the outdoor lifestyle of all the brewery employees through environmental conservation. Twin Leaf Brewery is best known for producing such flagship beers as 144 (Codename: Juicy Fruit) IPA, Luminosity Belgian Triple, and Magic Hour Gose as well as an ever-rotating selection of hand-crafted, one-off beers available only in their taproom. To learn more about the company, visit www.twinleafbrewery.com