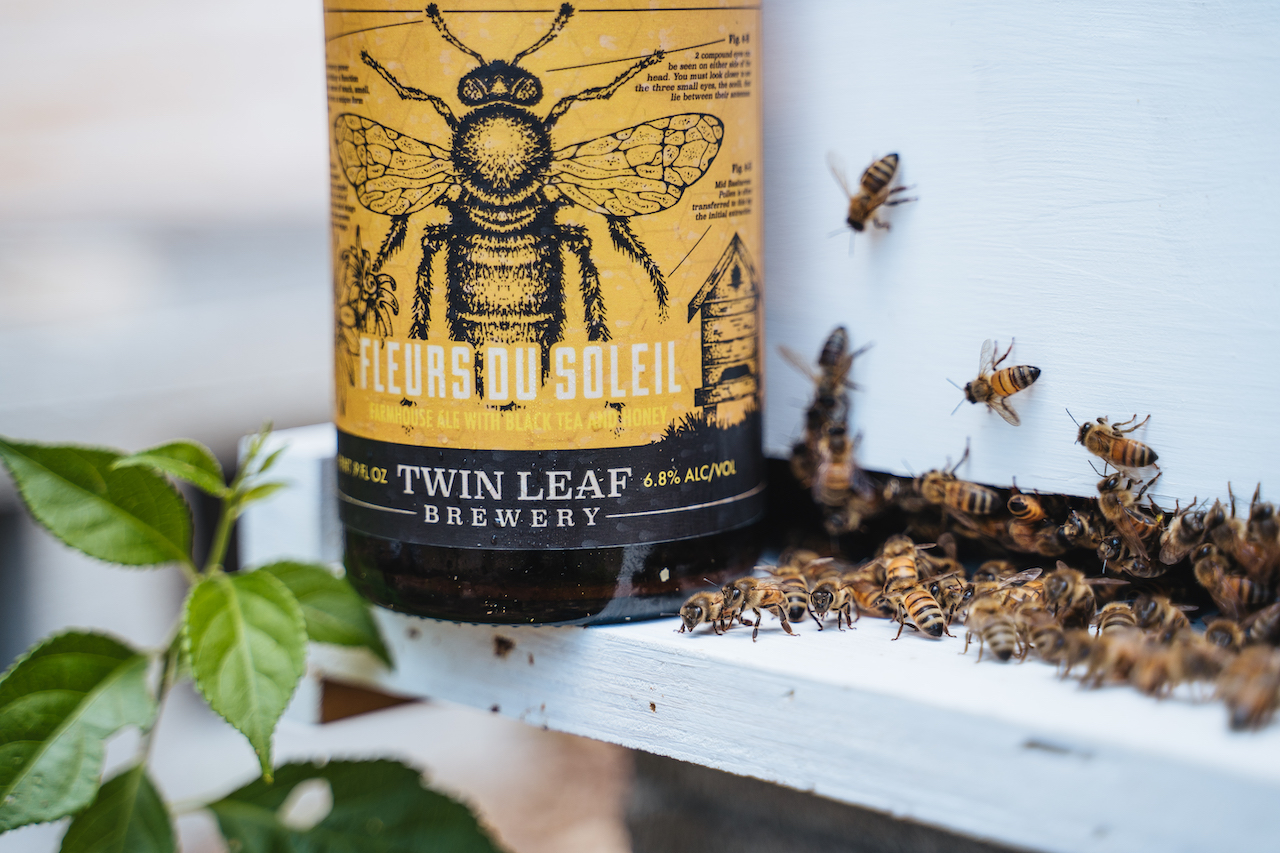 Starting in the late 1990s, scientists, conservationists, and beekeepers across the world began reporting a drastic decline in wild honey bee populations. As awareness and concern amongst the general public grew, Weber, a lifelong conservation enthusiast, decided to make a difference on a more personal level. He set up his first hives in 2014 and brewed the first batch of the Fleurs Du Soleil the following year. Initially, his hives did not yield enough honey for the saision, so he sourced the honey locally and donated a portion of proceeds from each bottle release to Bee City USA.

At present, Twin Leaf’s hives are thriving. For the past two years, the brewery has been able to source the necessary 30 lbs of raw, unfiltered honey from Weber’s personal hives. The dedication to the upkeep of the bees and the mission of supporting — even in a small way — a healthy pollinator population has proved to be a sweet endeavor for Weber. Last year, Twin Leaf Brewery received national recognition for their efforts when the Fleurs Du Soliel was awarded two silver medals at the National Honey Board’s Honey Beer Competition.

“I’ve always been interested in honey bees,” said Weber. “My great-grandfather was a beekeeper, and I grew up being fascinated by them. Now, I not only get the opportunity to continue a family tradition, but I am able to use the brewery as a platform to support a larger cause. This is why I got into brewing five years ago and why, even amongst all the sales and changes in the industry, I remain committed to my small role in the craft beer scene.”

The Twin Leaf team will continue to partner with local nonprofits on a variety of projects in a joint effort to support their local honey bee and pollinator populations. This month, Twin Leaf Brewery will adopt and landscape a new pollinator-specific micro garden space, directly across the street from the brewery’s taproom on Coxe Ave — as part of Asheville GreenWorks Adopt-A-Spot program.

The Fleurs Du Soleil, french for “Flowers of the Sun”, will be released on tap on Thursday, June 20 at Twin Leaf Brewery’s taproom in the South Slope district of Asheville, NC with plans to release a limited run of bottles later this summer.

Founded in 2014, Twin Leaf Brewery is a 10-barrel brewery located in Asheville’s South Slope district. Their always-rotating selection often features flagship brews that locals and visitors alike have come to know and love, including the Luminosity Triple, Dark Matter Oatmeal Stout, and Juicy Fruit IPA. Twin Leaf is committed to supporting an outdoor lifestyle for employees and makes conscious efforts to improve the brewery’s energy usage to promote environmental conservation awareness. To learn more about this Asheville staple, visit www.twinleafbrewery.com